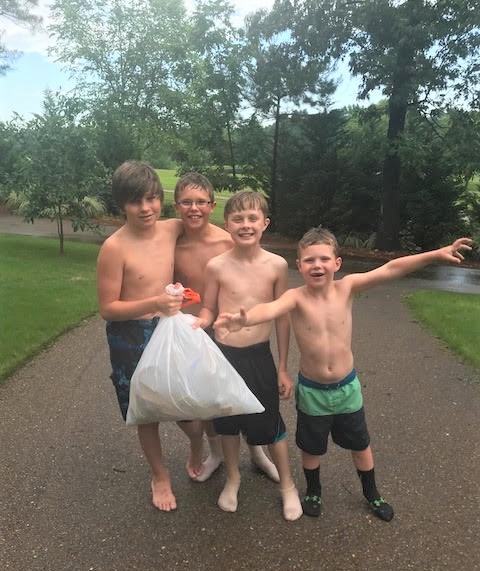 It’s not unusual for young boys to head outside after a rainstorm to slosh around in mud puddles and frolic in the dirty aftermath of a good downpour.

What is a bit out of the ordinary is four boys who combine their love of mud sloshing with community service.

After Friday’s deluge that dumped anywhere from 3 to 5 inches of rain around Oxford and Lafayette County in an hour’s time, Knox, 11, and Latham Laws, 8, Will Nordstrom, 11, and Grayson Cope, 11, walked over to Pat Lamar Park to see if there were any good puddles to splash through.

“We like walking in the rain and playing in the mud,” Knox Laws said Monday. “There was trash everywhere. I don’t really know where it all came from. I guess the rain brought it in when the streets flooded.”

Knox’s mom, Chandler Laws, saw the alarmed look on the boys’ faces when they saw all the trash in their stomping grounds and brought them all garbage bags.

“They felt so good about themselves,” Laws said. “They were very proud of their Styrofoam and plastic bottle loot.”

Knox said he’s watched his father Andrew often pick up trash around Sardis Lake when the family goes to the beach there to go boating.