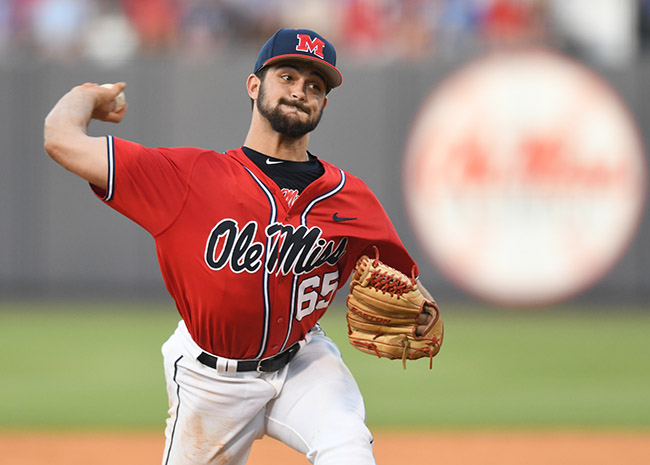 Ole Miss’ Parker Caracci pitches against Tennessee Tech in the NCAA Oxford Regional, at Oxford-University Stadium in Oxford, Miss. on Sunday, June 3, 2018. Caracci was named to the 2018 USA Baseball Collegiate National Team roster on Monday. The redshirt-sophomore out of Jackson, Mississippi, becomes the ninth player to earn a Team USA spot while on the Ole Miss roster.

Parker Caracci’s breakout season has earned him the chance to compete for his country.

Caracci on Monday was named to the USA Baseball Collegiate National Team, becoming the ninth Ole Miss player to ever claim a spot on the Team USA roster. The Rebels’ reliever is the 11th Ole Miss player or coach to play for his national team while associated with the university.

In his first season on Ole Miss’ active roster, Caracci emerged as the primary arm on the back end of the Rebels’ bullpen, finishing with 10 of Ole Miss’ program-record 21 saves. The hard-throwing right-hander posted a 2.25 earned run average in 48 innings with 73 strikeouts and 14 walks.

Most of Caracci’s work came in multiple innings of high-leverage situations. The Jackson native recorded more than three outs in 16 of his 27 appearances while eight of his saves came with the tying run on base. Seven of them came against ranked opponents.

A third-year sophomore, Caracci was taken by the Toronto Blue Jays in the 37th round of the MLB First-Year Player Draft but announced last week he’d be returning to Ole Miss for his junior season.