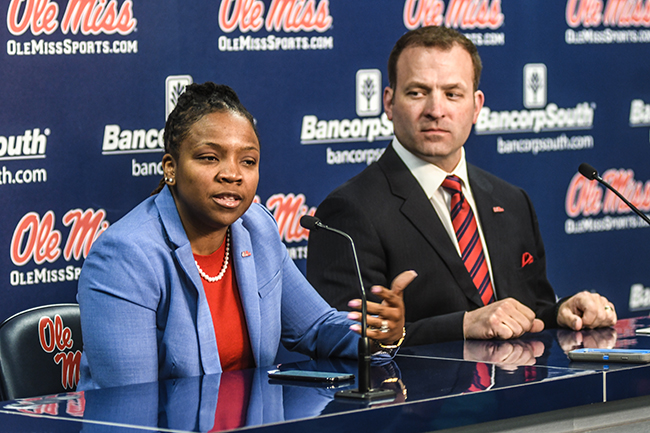 Yolett McPhee-McCuin, left, with athletic director Ross Bjork, is introduced as the new Mississippi women's basketball coach during a press conference at the Pavilion at Ole Miss, in Oxford, Miss. on Friday, April 6, 2018. (Bruce Newman, Oxford Eagle via AP)

Ole Miss’ women’s basketball coach hopes she can return to a more normal sleep schedule soon, but there hasn’t been as much time for it lately. Team workouts, camps and hiring a staff have consumed a lot of her hours, but most of them have been spent scouring the country for recruits just so the Rebels could have a full complement of players in time for the summer when the NCAA allows coaches to work with their team for up to eight hours a week, four of which can be used for on-court instruction.

Because there’s roster turnover, and then there’s whatever you want to call what McPhee-McCuin inherited when she was hired to replace Matt Insell in April. Nine players from last season’s roster, including four of Ole Miss’ top five scorers, are gone with all but one deciding to transfer once Insell and the school mutually parted ways in March after a five-year tenure that ended with Ole Miss finishing last in the SEC with one league win.

Only one player Insell signed for next season — Georgia forward Iyanla Kitchens — is still around, but McPhee-McCuin has signed eight of her own to replace them all. Counting DePaul transfer Deja Cage, who will sit out next season to fulfill NCAA transfer rules, 64 percent of Ole Miss’ scholarship players are newcomers.

“It’s been exhausting, but at the same time, it’s been exciting because it’s new,” McPhee-McCuin said. “It’s different. It’s a new era. Usually sometimes coaches don’t get the freedom to bring in players right away, and we have. I choose to look at it glass half full.”

Another newcomer expected to make an immediate impact is former North Carolina signee Jhileiya Dunlap, who inked with Ole Miss on Thursday after averaging 13.2 points and 8.2 rebounds last season at Gulf Coast State. Ole Miss could sign one more player to reach the 15-scholarship limit for next season, but McPhee-McCuin said she will likely keep that spot open.

“There’s a strategy,” McPhee-McCuin said. “That’s why we went and got some fifth-year transfers as well as a transfer that will sit out from DePaul. And a couple of junior college kids just to stabilize the program so we’re not just young our first year.”

McPhee-McCuin also had to recruit the players she inherited that weren’t sure what they wanted to do after the coaching change, including senior guard Shandricka Sessom, who was leading the Rebels in scoring before a torn ACL in December cut her season short. That meant making long drives or even hopping on a plane to sell her vision to players who ended up sticking around, though McPhee-McCuin isn’t complaining about having to travel as far west as Seattle and as far north as New York to construct her first roster with pieces both old and new.

“’I’m just built for this. This fits me. This suits me,” said McPhee-McCuin, who started her tenure at Jacksonville with back-to-back losing seasons before leading the Dolphins to the NCAA Tournament in 2016 as part of three straight postseason appearances. “I can tell you what, I’m not overwhelmed or depressed about it. … Did I think it would be at this large of a number? No. But at the same time, we’re just focusing on moving forward.”

McPhee-McCuin won’t get a look at her team in its entirety until the signees finish reporting to campus for the second summer session next week. Even then, summer workouts where fundamentals and skill work are the emphasis won’t tell her much.

She believes the group she’s assembled is more than capable of being competitive in a league that sent more than half its teams to the NCAA Tournament, but McPhee-McCuin is also being realistic as she starts the Rebels’ rebuilding process with more new faces than she anticipated.

“They will look like they enjoy what they’re doing, and I think that’s half the battle,” McPhee-McCuin said. “There’s a process. I’m not going to count myself out, but I’m also not going to say our goal is to win the SEC championship this year. My No. 1 goal is to give these seniors and the ones that stayed and trusted me the best experience they’ve ever had at Ole Miss. That’s the goal.”