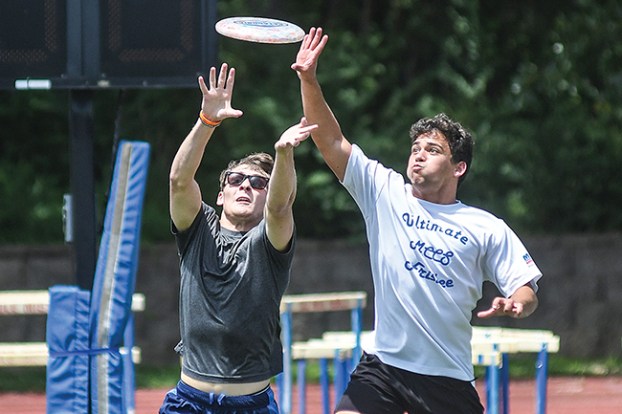 Kyle Smiley, left, and David Torrent attempt to catch a frisbee during a game of Ultimate Frisbee at Bobby Holcomb Field in Oxford, Miss. on Sunday, July 1, 2018.

An activity that helped Marines bond while stationed in Okinawa, Japan is now trying to weave its way into the Oxford community. Marine First Sergeant David Leach is attempting to bring Ultimate Frisbee to the youth of Oxford High School.

Leach, now a retired member of the United States Marine Corps, is the JROTC instructor at Oxford High but is spending his weekends teaching kids how to play a game he discovered for the first time in Japan and played for six years.

Stationed in Japan for seven years, Leach picked up the sport of Ultimate Frisbee which helped create a communal bond with the families who lived on the base. Leach wanted to introduce it to his students in hopes of creating the same bond. He has started a team at the high school and began training them before realizing there was not much in the way of an Ultimate Frisbee culture in Oxford.

“The sport of Ultimate is becoming much bigger than it was when we first started,” Leach said. “It’s about camaraderie and it’s about friendships and building those community relations. It’s built on that family structure.”

While overseas Leach formed the ‘Ulitmate Frisbee of Okinawa’ club and now wants to create ‘Ultimate Frisbee of Oxford’ (UFO) and host future tournaments — there is hope of a Veteran’s Day tournament — if it can grow large enough. He is incorporating the discipline of the Marines into the league with what he calls ‘unwritten things’ that go against the spirit of the game. No foul language is allowed and treating others with respect is two of the ten main rules kids abide by while playing.

To begin this grassroots movement, Leach is hosting sessions every Sunday at Bobby Holcomb Field on the campus of Oxford Middle School from 2 to 4 p.m. Skill level does not matter, but Leach wants to keep its particpants from ages 13 and up. Since the league has started he has had up to 27 kids come out to participate.

“People love the game, they just don’t know where to go (to play),” Leach said. “There’s no centralized thing, a pick up game where they could just come and go. …I’ve had a lot of people asking me to do it. So, I’m like ‘OK, if that’s what you want to do I’ll do it.’ Just someone’s got to take that first initial step to get the word out.”

Leach will continue to play Ultimate every Sunday through the fall until the cold weather becomes too much. Rain is not an issue unless lightning or severe weather is involved.

KNOW YOUR FOE: Texas Tech has plenty to replace in pass-happy offense

EDITOR’S NOTE: This is the first of a 12-part series breaking down each of Ole Miss’ football opponents for the... read more