Ole Miss’ A.J. Brown easing his way back from injury, rounding into shape before opener 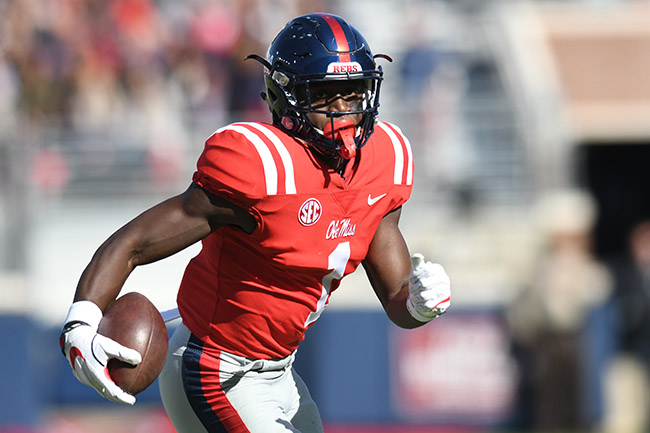 Intended or not, it’s been a quiet month for A.J. Brown.

Ole Miss’ star wideout hasn’t been on the field much as he tries to nurse his strained hamstring back to health. Brown returned to practice earlier this week but still hasn’t participated fully as a precaution with the Rebels’ Sept. 1 opener against Texas Tech rapidly approaching.

“I’m doing some things in practice,” said Brown, who added he’s dealing with some lingering soreness. “They’re just limiting me right now and easing me back in.”

Brown, who led the SEC in receiving yards (1,252) and touchdowns (11) last season, isn’t worried about timing having caught half a season’s worth of passes from Jordan Ta’amu after the Rebels’ quarterback took over for an injured Shea Patterson. Brown said he’s running gassers when he’s not practicing as the 6-foot-1, 225-pounder focuses on rounding back into shape after spending much of the last three weeks watching from the sideline.

Brown said the plan is to be there by the time the Rebels make the trip to Houston.

“We’ve been conditioning,” Brown said. “When I go in for the first game, it’s going to be the full game.”

Off the field, Brown took to Instagram before camp started to announce he was deleting all social media applications from his phone for possibly the entire season in an effort to minimize distractions. Brown has been back on since, posting an Instagram story Thursday afternoon, but he said he’s turned off all notifications and plans to keep it that way.

“I don’t receive anything or read anything,” he said.

Still, it’s hard for Brown not to hear things, particularly when it comes to his draft stock. Brown, who was named a first-team All-American by the Associated Press earlier this week and is on the preseason watch lists for the Biletnikoff and Maxwell awards, is widely projected to be the first receiver taken in next year’s NFL Draft. USA Today had Brown going ninth overall to the Washington Redskins in a mock draft released earlier this week.

Brown said he’s too caught up in the present to spend time worrying about his future.

“That’s not important right now. I don’t focus on it,” he said. “I’m trying to just win on Sept. 1 and do as much as I can. I’m not worried about none of that.”

Besides, he said, his game still needs some work once he’s completely healthy.

“Just finishing the play,” Brown said. “Sometimes a run will break and I’ll just sit there and watch like a bought a ticket or something. Just playing hard all the time and not taking plays off.”