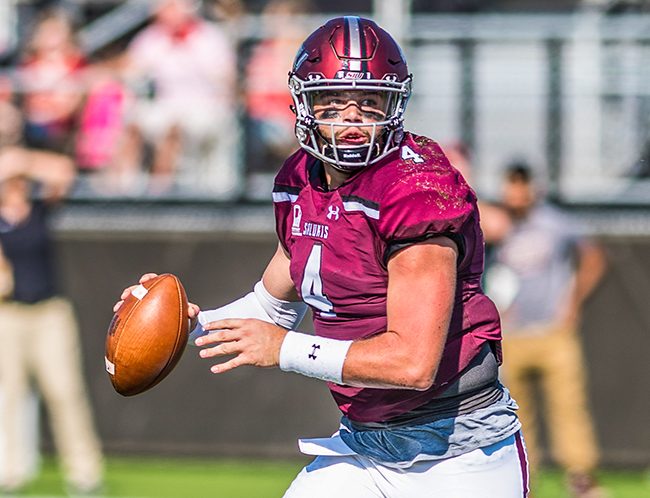 Southern Illinois has an experienced quarterback in senior Sam Straub, but the Salukis figure to test Ole Miss' defense the most on the ground Saturday. (Saluki Media Services)

The Rebels handled the Red Raiders 47-27 in front of more than 40,000 fans at Houston’s NRG Stadium, bringing some early momentum in Saturday’s game against Southern Illinois at Vaught-Hemingway Stadium (3 p.m., SEC Network alternate channel) that will be fortunate to match that attendance number. The Salukis are the lone Football Championship Subdivision opponent on the Rebels’ schedule.

Focus could be an issue with No. 1 Alabama set to come to Oxford for the teams’ SEC opener next week, but Ole Miss’ coach doesn’t expect a team that has another bowl ban in effect to take for granted a game that isn’t meaningless even if it isn’t the most competitive.

“There’s plenty of improvement we have to make from Week 1 to Week 2, and we get 12 opportunities together,” Luke said. “I want to take advantage of each and every one and hold ourselves to a certain standard about the way we perform and put a product on the field that everybody says, ‘Hey, I’m proud to be an Ole Miss Rebel when we watch those guys play.’”

Ole Miss’ offense was predictably explosive against the Red Raiders, piling up more than 500 yards of balance with Jordan Ta’amu throwing for 336 yards and two scores and Scottie Phillips rushing for 204 yards in his Ole Miss debut. Phillips accumulated 147 of those yards on three carries while the other 18 carries by the running backs averaged just 3.2 yards, a lack of efficiency that Luke and offensive coordinator Phil Longo both said needs work with the Rebels’ run through the SEC gauntlet looming.

Freshmen Isaiah Woullard and Tylan Knight will continue to back up Phillips with Eric Swinney (mononucleosis) still unavailable.

“Our goal is 4 yards a carry,” Longo said. “You get three and a half yards in the SEC, you’re running the ball pretty good, so 4 yards a carry for us is good. You just hate to have one carry that’s 90 yards and the other nine carries are for 10 yards.”

Ole Miss’ defense forced field goals more often than not and turned Tech over on downs three times but yielded nearly 500 yards of their own, including 164 yards on the ground. SIU forced six turnovers in a 49-10 rout of Murray State last week, but the Salukis are most known for their physicality on the other side of the ball that may serve as the biggest test for the Rebels.

One of the FCS’s more consistent rushing teams, the Salukis ran 65 times for 295 yards against Murray State. Senior D.J. Davis paced SIU with 127 yards on just 19 carries, but eight other players had at least one carry for the Salukis, who figure to give another heavy dose to an Ole Miss defense that finished 123rd in the FBS against the run last season and yielded more than 4 yards a carry last week.

Lafayette has final tune up before region play with…