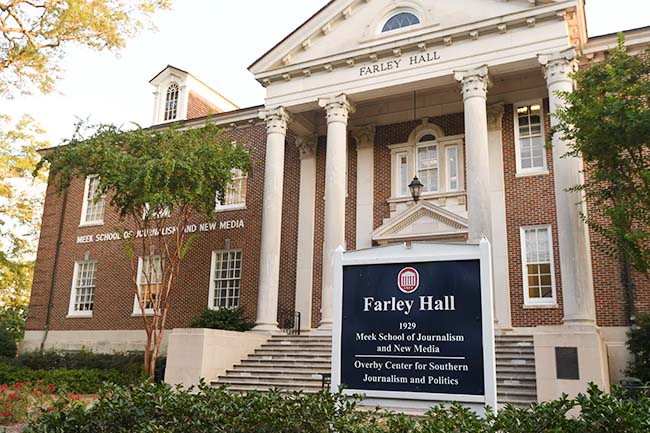 Ole Miss Chancellor Jeffrey S. Vitter announced on Tuesday that the University is proceeding with the steps required to remove Ed Meek’s name from the Meek School of Journalism and New Media.

“The proposal to change the name of the Meek School of Journalism and New Media has cleared all administrative steps required on our campus to change the name of an academic program. The faculty in the school voted to approve a request made by Dr. Ed Meek to remove his name from the school,” Vitter said in a statement released by the University. “The proposal was subsequently approved by the Undergraduate Council, the Graduate Council and the Council of Academic Administrators. Shortly thereafter, I submitted the proposal to the IHL Board for expedited consideration at its October meeting.”

The steps Vitter outlined in his statement correspond to a Sept. 21 open letter the chancellor sent to students, faculty and staff that identified the process Ole Miss must use to rename any academic institution on  campus.

On Sept. 23, Meek requested that his name be taken off the school of journalism, which expedited the process.

All that remains before the building can be renamed is a vote from the Institutes of Higher Learning board. The board is scheduled to meet on Oct. 18 in Jackson, though no agenda has been released for the meeting to determine if Vitter’s request will be among the items considered.

Last week, in a letter published by the University’s student newspaper, The Daily Mississippian, over 70  Ole Miss faculty, staff and graduate students issued a recommendation that the journalism school be renamed in honor of Ida B. Wells-Barnett, a journalist and co-founder of the NAACP who was born into slavery in Holly Springs, Miss. in 1862.

Meek’s request to remove his name came days after he published a controversial Facebook post featuring two African-American students that some deemed to have racial overtones.

Letter recommends UM school be named for Ida B.…