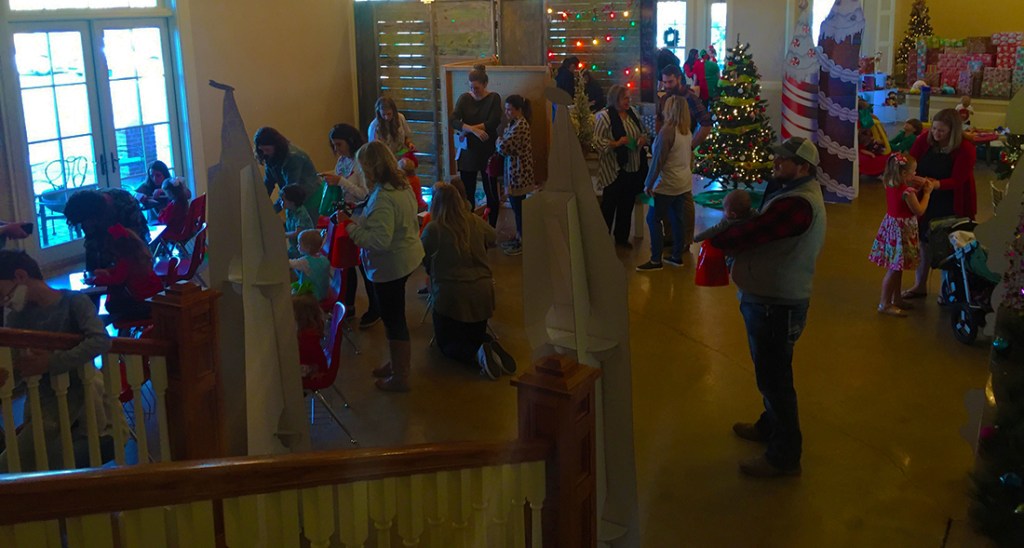 Parents watch over their kids as they write letters to Santa at Santa's Workshop 38655. (Chris Kwiecinski)

Children were strewn all over Castle Hill Sunday afternoon, as they crafted, wrote and indulged themselves with all things Christmas.

Ornaments were made, letters to Santa were written and pictures were even taken with St. Nick himself at the third annual Santa’s Workshop 38655, which was also a fundraiser benefitting the Morton family of Oxford.

With so much happening around 2:30, it was only a little surprising to hear Deanna Minga, event organizer and founder of the I Am Brave organization, say that moment in the afternoon was actually a lull in the action.

Minga’s I Am Brave foundation, along with 13 other sponsoring companies, hosted Santa’s Workshop 38655 to benefit Jack Morton, the 18-month-old son of Russell and Katrina Morton.

Jack was born with an extremely rare condition called CLOVES syndrome, which developed into a large facial tumor prior to birth.

All proceeds would go to the Morton family for Jack’s treatment, and that turnout from the greater Oxford community nearly left Russell and Katrina speechless.

Russell and Katrina said friends and colleagues from all walks of their life came to support them, and they were able to meet the people who came in to donate they didn’t know, and hear how these benefactors gave up time from their day to help Jack.

Katrina said the I Am Brave foundation took the lead on the fundraiser and did most of the set for the event.

“Nothing was required of us,” she said. “They just approached us about it at church one morning, and asked us if we’d be interested.”

From there, I Am Brave planned and executed its third workshop, which has shown a steady growth over its three years.

Minga said she counted 260 tickets that were counted on Saturday alone, and that number does not include the number of people who stopped by just to make a donation for Jack and didn’t buy a ticket.

Support from the community was also big for Minga, as she said sponsors, as well as volunteers, were a force in helping put the two-day event together. As the event keeps grows, Minga said she already knows she’ll need more volunteers.

“We can use a lot more for the future,” Minga said. “As it’s grown, we’ve realized we need a lot more.”

Kelly Wiggins, a friend of the Morton family who attended last year’s Santa’s Workshop, said she appreciates how the workshop includes specifics that both her one-year-old and four-year-old daughters can enjoy.

“It’s the only thing in town that has multiple levels of experience for the kids,” Wiggins said. “You get to help a friend, and they get a fun afternoon.”

As the workshop grows, it will allow I Am Brave to help more children like Jack, who will specifically travel to Boston next for a drug trail, and the proceeds from Santa’s Workshop will help pay for the treatment.

“Even though we don’t see it a lot,” Russell said, “People are good.”

City of Oxford announces promotions in planning and building…