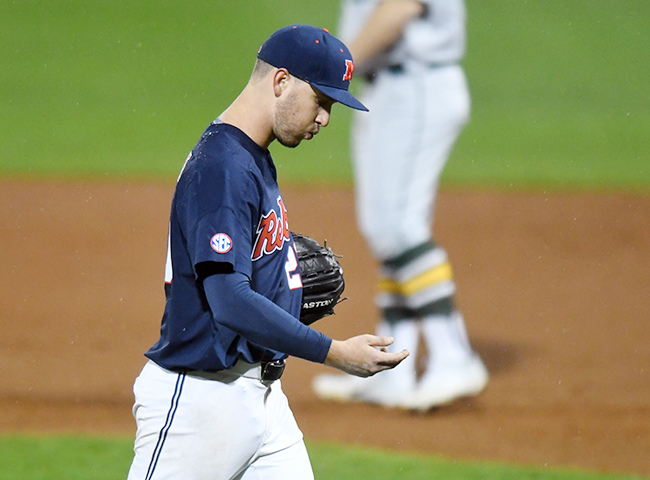 Ole Miss pitcher Will Ethridge walks off the field after being pulled because of a blister on a finger of his throwing hand against Wright State at Oxford-University Stadium in Oxford, Miss. on Friday, February 15, 2019. Ethridge will not pitch against Tulane this upcoming weekend to give the finger more time to heal. (Bruce Newman, Oxford Eagle via AP)

OXFORD – Ole Miss has played just three baseball games, but it seems like more question marks have arrived on the pitching front just about every outing. Friday, they’ll travel to New Orleans for a three-game series with Tulane, an opportunity to find some arm stability.

Will Ethridge was the steadiest member of the Rebel rotation on opening weekend. The Friday night starter for Ole Miss, he won’t throw against Tulane. Ethridge left his first start in the sixth inning due to a blister that arose on a finger on his throwing hand. He gave up just four hits and no earned runs in his opening night start, but Ole Miss is going to sit him until he’s fully healthy.

“I guess it’s maybe a little worse, I don’t know if that’s the right adjective, but worse than we expected,” said head coach Mike Bianco, talking about Ethridge’s blister. “It’s one of those things where we don’t want to rush him back. We don’t want to have to fight it every week.”

Bianco said that Wednesday was the first day where butting pressure on Ethridge’s finger didn’t produce any pain. He hasn’t thrown a baseball since last Friday but has been doing some other arm care to keep himself fresh.

Moving from his usual Saturday slot to replace Ethridge on Friday night will be Zack Phillips. The junior college transfer made his first start in a Rebel uniform Saturday; it wasn’t a very good one. Phillips would not get through the first three innings against Wright State in a 9-5 loss. His final stat line was 2.2 innings, six hits, four earned runs and two walks.

Houston Roth, a junior from Oxford High School, will make his first start of the season on Saturday. Roth looked quite good Wednesday night in a relief role against Arkansas State.

Coming off an AC joint sprain in his non-throwing shoulder that kept him from pitching in the opening weekend, Roth pitched two innings against Arkansas State, giving up only one hit, striking out four and allowing no earned runs. He said it was the first time he had thrown without pain since the injury.

“I felt good tonight. I may have had a little adrenaline help, but I didn’t have any pain in my shoulder,” Roth said. “It was a little stiff, I guess. But I felt good, I felt normal. I was excited about how it went.”

True freshman Gunnar Hoglund had his first planned start this past Sunday rained out. He started Wednesday against Arkansas State, throwing just two innings to get some in-game action under his belt. He’ll get his normal workload Sunday in Tulane.

Hoglund, a first-round pick in the 2018 MLB draft by the Pittsburgh Pirates, had a rough start to Wednesday’s game, but settled in during the second inning. He gave up three runs in two innings, admittingly not great, but for a true freshman making his first college start, it’s understandable.

“It’s hard to put into words the first time you run out there and pitch. It’s different in our sport because you can’t hide,” Bianco said. “The pitcher’s got to do it himself. It’s tough with all the expectations, but he’s so good. You’ve seen him and I’ve seen him here for six months. He’s been pretty special. But he hung in there (tonight). It could’ve been ugly, but it wasn’t. He hung in there.”

Locating his fastball was the biggest issue for Hoglund in his first start, something known to be maybe his best attribute coming into college. You’d think it’s something that could have been related to nerves. Sunday in New Orleans will see if that control is more of an issue moving forward.

Ole Miss used Wednesday’s game to get some of the bullpen arms their first live action. Outside of Hoglund and Roth, four others got at least one inning of relief work. Yet to see work on the year is the Rebel closer Parker Caracci. A redshirt junior, Caracci was an All-American by both Baseball America and D1Baseball last year. He’ll likely make at least one appearance at Tulane.