FILM STUDY: How the Oxford offense beat up on Northwest Rankin on Friday night 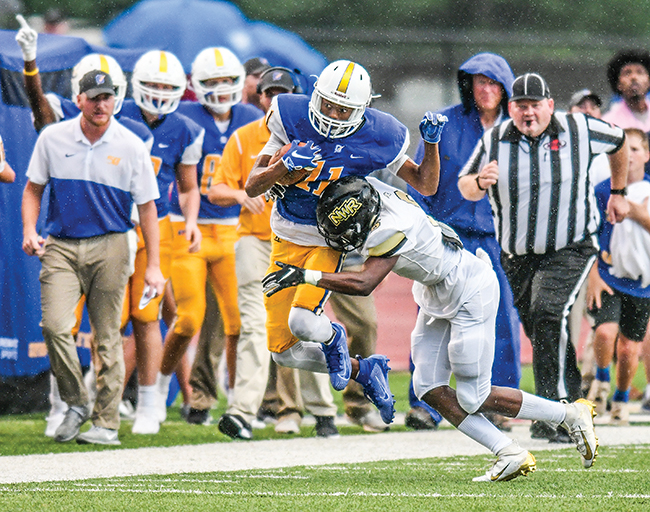 Oxford started off the year really strong, putting up 42 points against a Northwest Rankin team that went 11-2 a year ago, never surrendering more than 34 points in the process.

The impressive part for the Chargers offense is the varied ways in which they were able to move the ball.

The Chargers needed just 269 yards of offense (120 through the air and 149 on the ground) to put up those 42 points; granted, one touchdown came from a fumble recovered in the end zone. Oxford has places to improve before traveling to Starkville this Friday, no doubt. But these few signs from game one should give them optimism:

1. Impressive power rushing from a sophomore

Sophomore running back Omar Howell got just five carries in the team’s opening game, but he made the most of them. At one point, with the ball six yards from the end zone, Howell simply took a carry inside and ran through the entire Northwest Rankin defense, putting eight guys on his back for the touchdown.

More runs like that should cement the sophomore more carries, especially in short-yardage and goal-line situations.

2. Speed on the outside wins

Going into the season, The Eagle wrote a series of stories explaining why each of the three local high schools had a legitimate chance of winning state. For Oxford, it came down to the skill position players.

On more than one occasion on Friday night, the Charger defenders simply outran Northwest Rankin defensive backs. JJ Pegues had one deep catch down the left sideline and here, 6-foot-2 junior Dekyren Johnson just leaves his man in the dust.

If Meagher is able to put the ball more out in front of his man, the play easily goes for a 62-yard touchdown. The passing game didn’t put up monstrous numbers in game one, but it sure was efficient. Meagher completed 12 of 17 pass attempts, averaging 12.3 yards per completion.

3. Effective use of the zone read

John Meagher being a threat to run the football opens up a lot of things for this offense. On one play late in the game, he took it himself on a 23-yard touchdown run off a quarterback sweep. The great thing about these QB runs is that you don’t have to call it that much, you just need it as a threat.

The threat of Meagher keeping opens up a whole new world in the read-option game. In the second quarter on Friday night, it opened up a massive hole for K.J. Wadley, leading to an 81-yard breakaway score on the ground.

The above video shows two different angles of the same play. Notice how the right end hesitates, not knowing if Meagher is going to keep the ball or hand it off to Wadley. The indecisiveness leads to a massive hole in the right side of the offensive line and an untouched breakaway score for K.J. Wadley.

4. Utilizing JJ Pegues as a decoy

Simply put, JJ Pegues is the Chargers’ best player. But that doesn’t mean he’ll get the ball every play. Oxford and their coaching staff are smart, sometimes just using the senior as a decoy on a handful of plays a game.

In this play from the season opener, the threat of Pegues motioning across the formation at the start of the snap, and the fake handoff, shift the entire linebacking unit. This decoy motion creates tons of open space in front of the Oxford receiver when he gets the screen pass. All this is even amplified when the Chargers pull three offensive lineman downfield to help block on the screen.

Oxford certainly has some things to clean up from Friday night. No season opener is perfect, and the team faces a much bigger challenge in week to with their trip to Starkville. But there’s no doubt the team is off to a pretty nice start.

Nathanael Gabler covers Ole Miss and high school sports for the Oxford Eagle. You can reach him at nathanael.gabler@oxfordeagle.com with news tips, suggestions or comments. Follow @ngabler4 on Twitter. Video via Hudl/Oxford High School.