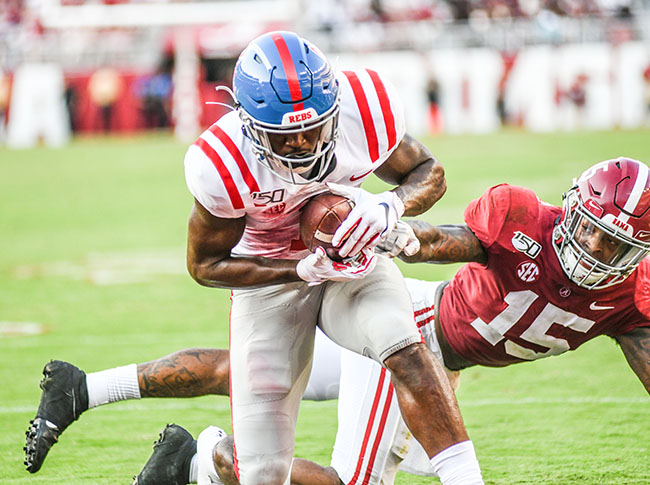 Mississippi wide receiver Jonathan Mingo (1) gets away from Alabama defensive back Xavier McKinney (15) for a touchdown catch at Bryant-Denny Stadium in Tuscaloosa, Ala. on Saturday, September 28, 2019. Alabama won 59-31.(Bruce Newman, Oxford Eagle via AP)

TUSCALOOSA, Ala. – Every single touchdown Ole Miss scored against Alabama on Saturday came from a true freshman.

Ole Miss is getting an unprecedented amount of effort from its 2019 recruiting class. Ole Miss lost 59-31 on the road in Tuscaloosa, but there were sure positives to bring back with them to Oxford.

But at 2-3 through the opening five games, The Rebels’ season isn’t lost quite yet.

“We just have to go build on it. There’s too many seniors to say we’re just going to build (for the future),” head coach Matt Luke said after the game. “We have a fan base that wants to win, so that’s what we’re going to try to go do. We’re going to put our guys in the best position to go win. And these freshmen are just going to keep getting better.”

True freshman John Rhys Plumlee got his first career start at quarterback at Alabama. The EAGLE went deeper on his start late after the game on Saturday, but Plumlee was solid. He showed enough, throwing two touchdowns and adding one more on the ground, to get the coaching staff to say he’d have a chance at seeing playing time even when Matt Corral returns from injury.

Ole Miss’s first touchdown of the day came on the ground, a Plumlee rush. Later, Plumlee connected with Jerrion Ealy for a short score. He then hit Jonathan Mingo down the left sideline for a 26-yard score. Each of the above names are not just true freshmen, but true freshmen from the state of Mississippi. Late, with the game well out of hand, it was Grant Tisdale who got some work at quarterback. He hit Jadon Jackson on a 28-yard touchdown for the final Ole Miss score – two more true freshmen from the 2019 recruiting class.

“These guys, you’re talking about true freshmen that are playing for the first time in this kind of environment. They have a lot of work to do, but they’re eager and they’re great guys,” offensive coordinator Rich Rodriguez said. “We have some good young players and that’s exciting for the future. It’s disappointing right now because we know we can play better. But when you see what the future holds for Ole Miss, Ole Miss football, I think you can be excited when you look at those young guys.”

But it’s not just the guys scoring the football. Ole Miss is getting help from a handful of places from these young guns.

True freshman Nick Broeker has been seeing a good bit of playing time at left tackle. He’s yet to make a start, but has been playing about half of the left tackle snaps over the past three weeks. Snoop Connor, the Rebels’ third running back who’s accounted for 154 rushing yards, is a true freshman from Hattiesburg. Deantre Prince, a true freshman corner from Charleston, Miss. earned himself more consistent time against Alabama after intercepting a ball against Arkansas in his first action. And there’s a handful more, including A.J. Finley, that have started seeing time on defense after earning it in special teams.

The new redshirting rules help with getting this many young guys on the field. Now, players are able to play in up to four games, as many snaps as the coaches would like to use them, and then still redshirt. So theoretically (and this would be wildly unlikely at this point), Ole Miss could still play John Rhys Plumlee for two more games and then redshirt him.