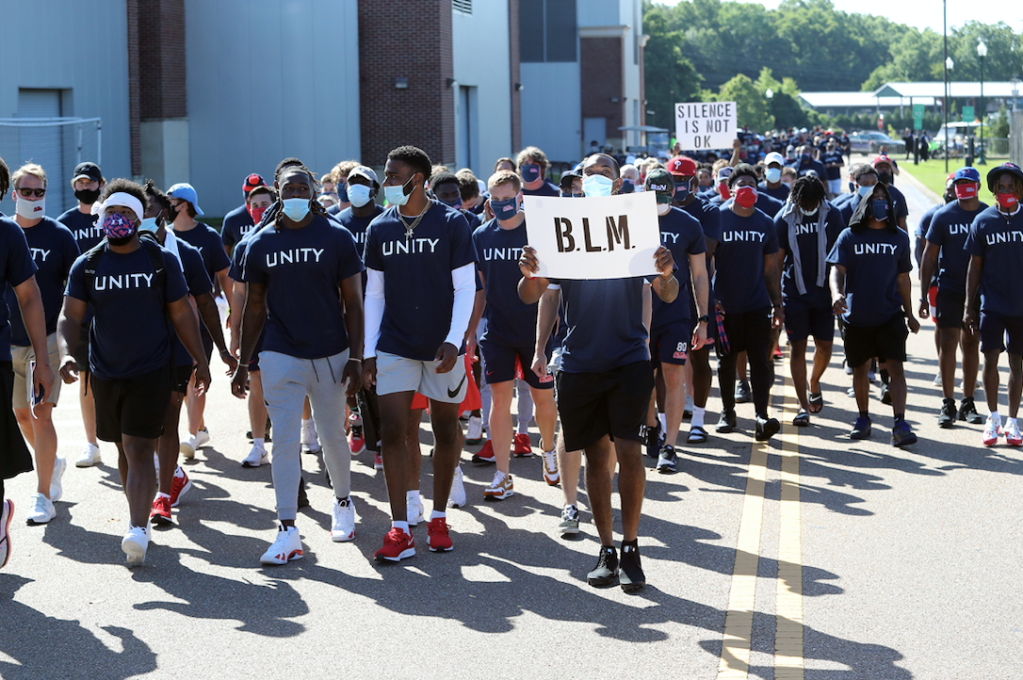 Ole Miss student-athletes, coaches and staff participate in a Unity Walk on campus on Saturday, June 6, 2020. Football players posted a video on social media this past weekend asking for the removal of the Confederate statue located on the Oxford Square. (Joshua McCoy/Ole Miss Athletics)

Change is coming to one of the Confederate statues in the LOU Community, but members of the Ole Miss football team are asking for more.

In a video posted on Twitter this past weekend, Ole Miss players called for the Confederate statue in front of the Lafayette County Courthouse be removed.

The two-minute video features MoMo Sanogo, Ryder Anderson and Jerrion Ealy, among other players, asking the Lafayette County Board of Supervisors to move the statue from its current location.

This comes after the Institutions of Higher Learning approved the University of Mississippi’s relocation plan of the statue located on the Lyceum Circle last Thursday. Players praised the IHL’s vote in the video.

“It’s that we remove that statue from the Square and continue to work towards that,” Anderson said.

The video ended with every player saying “Together. We Can.”

On Monday, the Board of Supervisors held a special meeting allowing for residents of Oxford and Lafayette County to discuss their stance of either removing the statue or keeping it where it currently stands. No action was taken but the Supervisors could bring it up for a vote at their July 6 Board meeting or at a future meeting. Only Lafayette County has the power to remove the statue as it resides on County property.

The players also spoke out about police brutality with the video starting with Anderson giving his condolences to George Floyd, Breanna Taylor, Dominique Clayton and “countless others who had their lives taken,” Anderson said.

Clayton was found murdered in her bed last May, resulting in the arrest of former Oxford Police officer Matthew Kinne, who was charged with capital murder. Kinne’s trial was set to start in April but the COVID-19 pandemic postponed Lafayette County’s April court session.

Sanogo and other players are taking part in L-O-U-NITED’s A March for Progess: Together We Can event on Saturday. The march will begin at 3 p.m. at City Hall where t-shirts will be sold with proceeds donated to The Family of Dominique Clayton Fund and The Boy’s and Girl’s Club of North Mississippi.

You can watch the full video below:

Together. We. Can.
Let’s make our community better for all 🙏🏽 #BLM pic.twitter.com/Qt1fh5ZPGH

Servideo reflects on following in his grandfather’s footsteps, “crazy”…