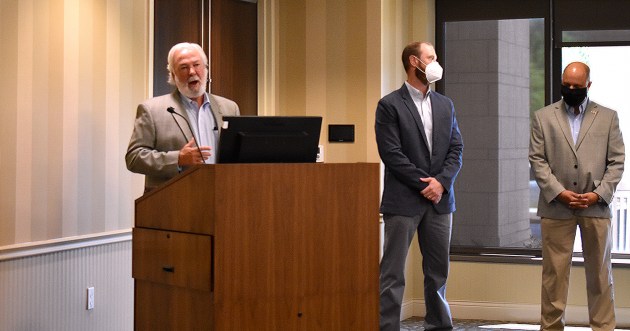 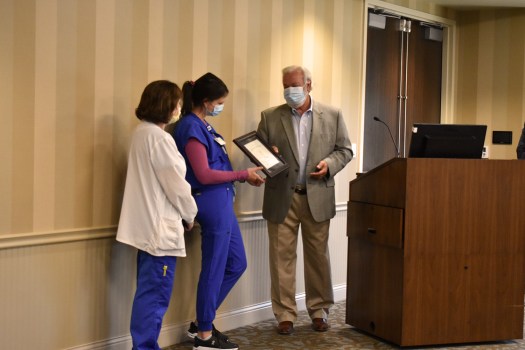 The US Marshals held a short recognition and thank you to the staff and physicians of Baptist Memorial Hospital-North Mississippi on Thursday, August 6.

The staff and physicians of Baptist Memorial Hospital-North Mississippi were recognized by the US Marshals for saving the life of Deputy US Marshall Bob Dickerson after he was shot in the line of fire during a shootout on May 15.

“We wanted to take this opportunity to come back out here after everything that all of us went through back in May,” Danny Kittrick, the US Marshall for Northern District of Mississippi, said. “It was early in the process that Mike Quarles and I started telling each other that we got a lot of people that we’re going to have to find when all of this is over with.”

The recognition and thank you was held in the Magnolia Room in Plaza One of Baptist Memorial Hospital-North Mississippi. The recognition was at 2p.m. and lasted no longer than 15 to 20 minutes.

“There is no doubt that God’s hand was all over this from the very get-go,” Mike Quarles, the Deputy Commander of the task force, said. “This was suppose to happen 40 miles away in a sweet potato field in North Mississippi. But it happened just a few 100 yards from the hospital here and there is no better care out there.”

Dickerson was part of a unit executing an arrest warrant for capital murder suspect Hunter Carlstrom on May 15. He was hit during a shootout on South Lamar Boulevard and was rushed to the hospital for emergency surgery. He was released from the hospital seven days later.

Upon his release from the hospital, Dickerson was met with a Hero’s Parade. He was surrounded by nurses, doctors, family, friends and colleagues who all offered him applause, cheers and hugs as he exited from the hospital’s back entrance doors.

Dickerson could only muster a “thank y’all,” before emotions got the better of him.

The May 15 pursuit of Hunter Carlstrom began when he tried to evade capture from law enforcement. An arrest warrant for Carlstrom was issued upon learning of his connection with the May 7 murder of James Sartorelli in Arkansas.

A shootout took place on South Lamar Boulevard during a traffic stop. Pursuit of Carlstrom ended when his girlfriend’s vehicle was pinned in near the Azalea Drive intersection. Carlstrom was pronounced dead at the scene after law enforcement officers returned fire.

Carlstrom’s girlfriend, Xaveriana Cook, was charged with aiding and abetting in the attempted murder of Dickerson during a hearing in front of a U.S. Magistrate Court on Wednesday.