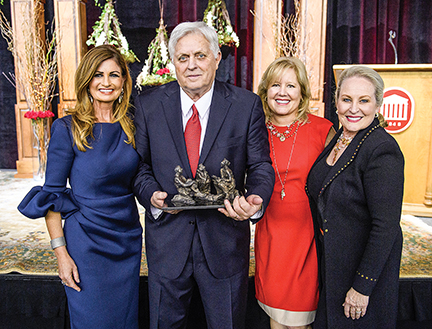 “I had the great privilege to serve as chancellor,” Khayat said during the program in his honor. “I really do believe that Ole Miss is a remarkable team.”

The Ole Miss Women’s Council for Philanthropy awards the honor annually. C Spire was the presenting sponsor of the 2016 event.

“We’re so grateful for all you do to make Ole Miss and Mississippi the best it can be,” said Archie Manning.

“Philanthropy provides resources for us to truly transform lives through discovery, learning and engagement,” he said. “Everyone here tonight has generously given to this university.”

“When I think back in my first few months as I’ve filled the chancellor’s role, which by the way you set the standard for,” Vitter said, addressing Khayat, “your vision of making the University of Mississippi a great, American, public university has been a great inspiration to me.

“And I know it’s going to come as no surprise to any of you tonight that you’ve been such a great help and mentor, a friend, and I really appreciate all you’ve done in this transition.”

Khayat was the UM chancellor from 1995 to 2009. He is credited with bringing new life to the university.

Some of his UM accomplishments mentioned during the program include helping found an honors college and institutes of international studies. He worked to initiate racial reconciliation. He secured a Phi Beta Kappa chapter and millions of dollars in private support.

Under Khayat’s leadership, the campus was renovated, landscaped and a new chapel, performing arts center and an indoor athletics practice facility were constructed.

Perhaps most notably, student enrollment increased by 43.6 percent and the university’s budget grew from $500 million to $1.5 billion annually under Khayat’s leadership, according to a UM news release.