The southern soul rockers Nathaniel Rateliff and the Night Sweats and blues legend Dr. John (with his band the Nite Trippers) were announced as the headliners for the 22nd Annual Double Decker Arts Festival today.

Rateliff and co. will be playing on Saturday night to close out the festival. Rateliff, is a powerhouse vocalist who draws comparisons to Otis Redding and his backing band (featuring guitars, drums and a horn section) make him a live force.  His self-titled, debut album came out in 2015 on the legendary Stax label in Memphis. 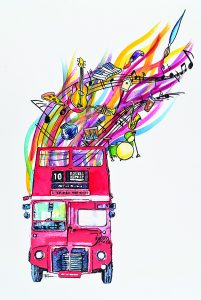 The full music lineup was also unveiled this morning and will kick off on Friday, April 28 at 6 p.m. on the Specialty Orthopedic Stage with Jimmy “Duck” Holmes followed by a special edition of Thacker Mountain Radio at 7 p.m. Closing out the first night’s festivities are the alternative soul, female duo Muddy Magnolias.

Before Rateliff storms the stage, Oxford is in store for a long day of music. At 10:15 a.m., The Mississippians Jazz Ensemble will be starting off the day. Following them, multiple artists including Amelia Eisenhauer and the Peruvian Farm Girls, Seratones and James McMurtry will be performing.

For over two decades now, the Double Decker Arts Festival has been an Oxford staple during the spring. This year, live music, food and, of course, art will be returning to the Square.

An estimated 65,000 people will be coming to Oxford from April 28-29 for the event which will feature the namesake buses that came from England in 1994. The first Double Decker Festival happened one year later.

Local artist Pam Locke was revealed as this year’s artist for the official poster and t-shirt design.

“I entered the contest because I feel the Double Decker Festival is such an important part of Oxford and is a showcase for the wonderful art that is produced in the region surrounding Oxford,” Locke said. “I wanted to be a part of that celebration.  For several years, I have had this idea in my head to express Double Decker as a blend of art with a festive atmosphere.  I finally got around to making it a reality.”

Visit Oxford Director Mary Allyn Hedges spoke about how the festival has expanded over the years.

“Every year it grows and evolves,” she said. “It has become a champion event in our region.”

Also this year will be the return of the Spring Run on April 29th at 7:30 a.m. with new 5K and 10K courses. An estimated 1,600 racers will be participating from 26 different states. There will also be a kid’s run taking place at 9 a.m. Registration is now open for it on doubledeckerspringrun.com.

More than 160 vendors curated by the Yoknapatawpha Arts Council will be on hand this year with drawings, jewelry, photography, paintings and more.

The festival this year will be presented by the University Museum and Rowan Oak in partnership with Ole Miss Athletics.