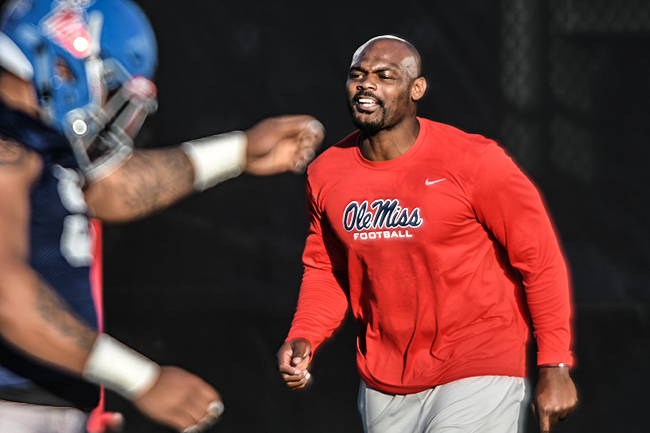 “Every day, I learn them by their numbers first,” Roach said. “That’s how I’ve kind of learned who they are, but I think I’ve got them all down now. I still call some of them by their last names, but it’s getting better.”

Roach has been trying to get up to speed with everything at Ole Miss after being a late addition to Hugh Freeze’s retooled staff. Former North Carolina defensive line coach Tray Scott was Freeze’s first choice to fill the same position for the Rebels when Chris Kiffin left to work for his brother, Lane Kiffin, at Florida Atlantic, but Scott left in early February less than six weeks on the job to take the same position at Georgia.

Freeze’s search for a replacement ended with Roach, the former Alabama linebacker who’s had on-field coaching jobs at Murray State, East Mississippi Community College and, most recently, South Alabama but spent the last two seasons on Nick Saban’s staff as the Tide’s director of player development.

Roach was hired Feb. 16 — just 12 days before the Rebels held their first practice of the spring — but he said that kind of short notice sometimes comes with the territory in his line of work.

The names of the players he’s coaching are coming easier to him now, and he’s able to rattle off some of the ones that have stood out to him. Marquis Haynes, Breeland Speaks and Benito Jones are among them, Roach said, but it’s rare to find a coach who doesn’t sing his players’ praises in the spring.

Roach said the important thing is his group has been coachable as players try to get comfortable with their new coach and vice versa.

“All the guys up front, they’ve worked and done everything I’ve asked them to do,” he said. “They’re eager to learn, and that’s all I can ask for at this moment.”

Haynes is back as one of the Southeastern Conference’s top pass rushers, but the Rebels lost two starters in defensive end Fadol Brown and nose tackle D.J. Jones as well as rotation mainstay Issac Gross from a unit that underperformed as a whole last season. The Rebels plummeted to 120th nationally in run defense, allowed 5.4 yards a carry and finished 96th in sacks.

Ole Miss still has depth that’s been bolstered by the addition of former transfers Qaadir Sheppard and Josiah Coatney. Roach didn’t give a certain number when asked how deep he’ll go with his rotation up front, simply offering that he’ll play “as many as I can get to that quarterback.”

His focus the rest of the spring is getting his new unit to play a certain kind of way.

“It’s our job to get them in the position to do what they’ve got to do so we can be successful, but depth-wise, we’re fine,” Roach said. “We’ve just got to keep playing fast, playing physical and do the things we’ve got to do to play winning football.”