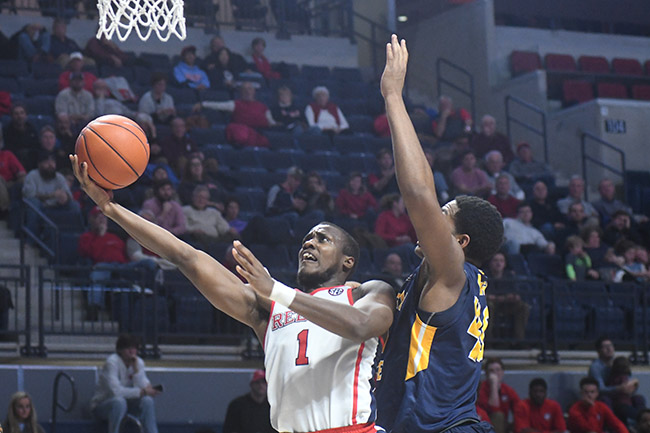 NASHVILLE, Tenn. — Andy Kennedy knew it was coming. So Ole Miss’ basketball coach decided to have some fun with it.

“Top 10 in the country, that’s awesome,” Kennedy joked. “That’s a great selling point for us. I appreciate the hard work we’ve put in over the years finally getting acknowledged.”

Ole Miss was voted 10th, but it was in the media’s preseason Southeastern Conference basketball poll released Wednesday as part of the league’s annual media day at the Omni Hotel in Nashville, Tennessee.

Kennedy’s teams are used to being picked to finish in the bottom half of the league standings at this point — and exceeding those expectations. The Rebels have been picked to finish ninth each of the last two seasons and haven’t been pegged to finish higher than sixth since the conference did away with divisions before the 2011-12 season.

Ole Miss finished higher than their projection each of those seasons, including a tie for fifth last season. The Rebels have exceeded their preseason prediction in all but two of Kennedy’s 11 seasons at the helm.

The Rebels return six contributors along with their top two scorers from last season in Deandre Burnett and Terence Davis. Yet Ole Miss still finds itself fighting for respect in a league where everybody is chasing perennial power Kentucky.

“That’s what we wake up every day and fight for, respect,” Davis said. “They picked us to finish 10th. Every year, they’ve picked up to finish close to last and we’re always finishing sixth, seventh, tied for fifth last year. I know we’re fighting for respect. I think it’s just fuel to the fire.”

Burnett said Kennedy’s ability to adapt his system to his personnel over the years has been the primary reason Ole Miss is usually better than expected. Burnett, Davis and point guard Breein Tyree are part of what Kennedy called perhaps the deepest and most talented backcourt he’s had in Oxford with the additions of Memphis transfer Markel Crawford and freshmen Ilya Tyrtyshnik and Devontae Shuler, a four-star signee out of prep powerhouse Oak Hill Academy.

Add 7-footer Dominik Olejniczak and stretch forward Bruce Stevens, a former junior college All-American, to the mix, and the Rebels believe they’ve got plenty of pieces to again blow up the projections and make a run at the NCAA Tournament after finishing last season in the National Invitation Tournament quarterfinals.

“Me and Terence laughed about it,” Burnett said. “Andy Kennedy always finishes higher than he’s projected. … He’s been doing a great job at it for, what, 12 years now? I don’t think it will change this year.”