Ole Miss working through ‘combination’ of problems amid losing streak 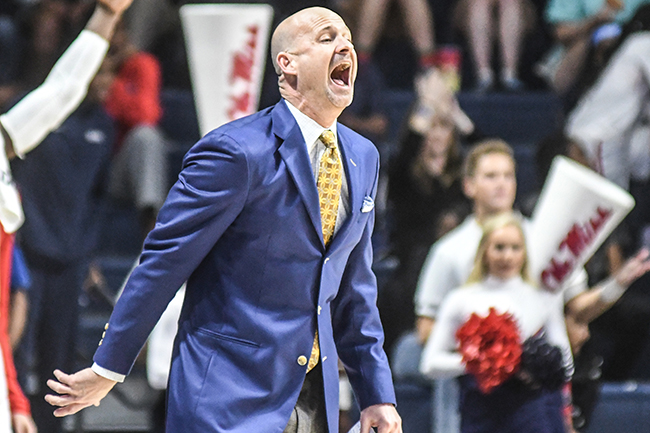 Ole Miss' Andy Kennedy yells during the game against Virginia Tech at the Pavilion at Ole Miss, in Oxford, Miss. on Saturday, December 2, 2017. (Bruce Newman, Oxford Eagle via AP)

It would be easier for Ole Miss basketball coach Andy Kennedy to go about trying to solve the problem if it was just one he could pinpoint for his team. Instead, it’s “a combination” of different issues that Kennedy said has plagued the Rebels during their longest losing streak of the season.

“When you’re playing quality competition, those things bite you,” Kennedy said. “That’s what has happened to us.”

Ole Miss (4-4) has lost three straight following a 77-58 setback at Middle Tennessee State on Saturday in its first true road game of the season. The skid started with back-to-back overtime losses to South Dakota State and Virginia Tech before the Blue Raiders ran away from the Rebels late in the second half, capping a stretch where Ole Miss came up empty against three top-100 RPI teams.

Ole Miss’ next chance to get back in the win column comes Wednesday at The Pavilion against Sam Houston State (7 p.m., SEC Network alternate channel), a team that comes in with a sub-200 RPI. But the Rebels have plenty of work to do to get there.

Kennedy said the Rebels’ biggest issue offensively is decision-making, particularly when half-court sets break down and players are forced to improvise. On the defensive end, Ole Miss’ depth and athleticism on the perimeter — Kennedy freely rotates guards Terence Davis, Breein Tyree, Markel Crawford, Deandre Burnett and Devontae Shuler in and out — hasn’t been much of a deterrent so far in trying to keep teams from getting where they want to go off the bounce, leading to consistent breakdowns that have Ole Miss ranked 198th nationally in field-goal percentage defense (44 percent) and 290th in points allowed (78.4 per game).

“Our inability to keep people in front of us, which leads to unnecessary rotations which inevitably lead to open shots,” Kennedy said. “The other team is making them.”

The Rebels are also fighting consistency in their mental approach, something that’s baffled Kennedy the most considering his team’s experience level. Ole Miss trailed by 20 at halftime against South Dakota State before mounting a comeback to force extra time while the Rebels led Virginia Tech by as many as 16 in the second half before squandering the lead.

Ole Miss played MTSU, one of the nation’s top mid-major programs, tight early and led 34-33 at the break. But MTSU started the second half on an 8-0 run, led by double digits seven minutes into the half and ended the game on a 17-2 run once Ole Miss got within four with 4:44 remaining.

“Everybody’s not just engaged for 40 minutes,” forward Marcanvis Hymon said. “I think we come out with the right intentions and them last couple minutes, I think we kind of relax and don’t keep playing with that edge and that sense of urgency. That gets us.”

Kennedy said he’s made some changes to the way the Rebels prepare in an effort to get his team more locked in. But he’s also looking to his veteran roster — Hymon is one of four seniors and six upperclassmen in Ole Miss’ nine-man rotation — to help with that.

“I expect those guys to have a real understanding of every opportunity we don’t take advantage of is one less for them as the clock ticks on their careers,” Kennedy said. “It’s a little concerning that we’re not as focused as we need to be.

“We just seem to not be able to have the fortitude to fight through (adversity). Hopefully that will change quickly.”

Ole Miss still has nearly three months of games left with varying degrees of opportunities remaining in the non-conference portion of its slate before South Carolina comes to Oxford on New Year’s Eve for both teams’ SEC opener. Sam Houston State (5-4) starts a string of four straight home games for the Rebels before Christmas, a span in which they’ll need to hold serve in their own building with Illinois State being the only top-100 RPI opponent during that stretch.

For the Rebels, the focus will be on themselves as much as it is their opponents.

“Still got four games left of non-conference before we get into conference play, all at home,” senior guard Deandre Burnett said. “We’ve got to focus on not having those lapses and being able to put it all together.”