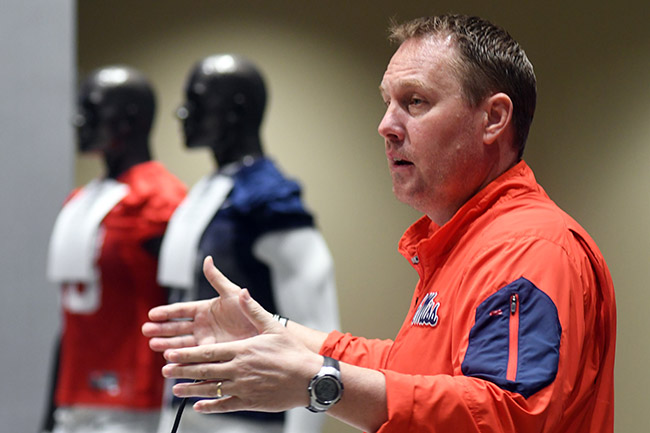 Hugh Freeze on Wednesday made his first public appearance since abruptly resigning as Ole Miss’ football coach over the summer, hitting on a “false pride” that led to a pattern of personal misconduct that led to his ouster.

Speaking at a convocation at Liberty University, Freeze also asked for forgiveness for what he called a “private sin,” one that became public in July 2017 when an open-records request for Freeze’s university-issued cell phone records led to the discovery of calls made to numbers linked to female escort services and massage parlors. Freeze forcibly resigned on July 20 amid what athletic director Ross Bjork called a “concerning” pattern of personal misconduct.

“My world got rocked in 2017, and all the walls came crumbling down when what I thought was a private sin that I had struggled with and confessed to my wife and to two of my friends in 2016 … it became public knowledge in July of 2017,” Freeze said. “My world crumbled and the question started being asked: ‘Man, is his faith real? Is his faith genuine?’”

Freeze said he’s gotten forgiveness from his family, including his wife, Jill, whom Freeze called “the real hero.” He took the opportunity to request the same for the first time in a public setting.

Freeze, who led the Rebels to a pair of wins over Alabama and a Sugar Bowl victory during his five-year tenure, described trying to initially address his issues alone and thinking he could work through them in solitude, which created what he called “a little false security” that he likened to scoring a touchdown on a broken play. Freeze urged the students in attendance to take the alternative approach when dealing with certain issues.

“Hey we’re averaging 40-something points in the Southeastern Conference. We’re rolling,” Freeze said. “Well I hate to break it to you, but maybe you have a little false security or false pride, and that’s where I found myself. … The lie that we have that I bought into and that I allowed is that I can white-knuckle through something and I can be isolated.

“Don’t go at it alone. It will lead you down a road you don’t want to go. Confess it. Own it.”

Jill spoke toward the end of the convocation. She said she forgave Hugh because she knew the “heart” of a man she’s been married to for 25 years.

“I know he loves God, and I know he’s going to do what it takes to get right with God,” Jill said. “For that, it was easy in that moment (to say), ‘I forgive you.’ Immediately. That was the beginning of my healing. It was instant forgiveness for him.”

Hugh didn’t address any of the allegations in Ole Miss’ NCAA infractions case that resulted in a multi-year bowl ban that the school is appealing. Freeze, who still hasn’t been hired by another school, also didn’t talk about any potential job suitors.

As part of the penalties handed down by the NCAA, Freeze would be suspended for the first two conference games next season should somebody hire him as a head coach.

Hugh and Jill’s appearance at the convocation was streamed on Liberty University’s official Facebook page. The video is below.