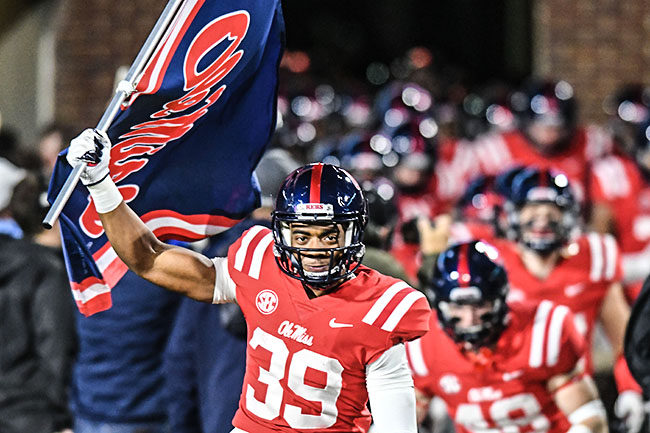 The Rebels received a two-year bowl ban and additional scholarship reductions as part of the final ruling issued by the NCAA’s Committee on Infractions in the school’s infractions case. The bowl ban is added to include the 2018 season.

Four years of probation running concurrent with the current probation period was also levied against the school in addition to a financial penalty of $179,797. Ole Miss will also be docked 13 total scholarships through the 2018-19 academic year.

Former head coach Hugh Freeze was given a one-year penalty where he would be suspended for the first two conference games if another school decided to hire him before next season. Former off-field staffer Barney Farrar was given a five-year show-cause penalty while former defensive line coach Chris Kiffin, now the defensive coordinator at Florida Atlantic, was given a two-year show-cause order.

The penalties are tacked on to those self-imposed by the school in response to the amended Notice of Allegations it received in February, which included three years of probation, the loss of 11 scholarships over four seasons starting with the 2015-16 academic year and a bowl ban this season.

The COI’s decision comes 80 days after it heard the school’s case over a two-day span in September. The amended NOA added eight new allegations to run the total to 21 with 15 of those being Level I charges — the most serious in the eyes of the NCAA — including a lack of institutional control that replaced the more limited failure-to-monitor charge that appeared in the original NOA the school received in January 2016.

Eleven of the Level I charges were tied to the five-year tenure of former coach Hugh Freeze, who resigned in the summer amid an escort scandal. Among them was former off-field staffer Barney Farrar and former defensive line coach Chris Kiffin allegedly arranging for Lindsey Miller, the estranged stepfather of former Ole Miss offensive lineman Laremy Tunsil, and then-recruits Kobe Jones and Leo Lewis, who now play for Mississippi State, to receive $2,800 in free merchandise from Rebel Rags, an Oxford-based retail clothing store.

Farrar was also accused of arranging as much as $15,600 in cash payments to Lewis, a central figure in the case after being granted immunity from potential sanctions at MSU in exchange for a truthful account of his recruitment by Ole Miss. Rebel Rags has sued Miller, Jones and Lewis for defamation, commercial disparagement and civil conspiracy in a case that’s still playing out in the legal system.

In its 124-page response to the amended NOA, Ole Miss fought a charge against Freeze of failing to monitor his coaching staff as well as the alleged free merchandise and cash payments, challenging the testimonies of Jones, Miller and Lewis. The school also tried to shoot down Lewis’ credibility by pointing out inconsistencies in his various testimonies, but the NCAA’s enforcement staff said it found Lewis to be credible in its final report in which it reinforced all 21 charges.

Four of the Level I charges dated back to the tenure of Houston Nutt, who coached Ole Miss from 2008-11. Two of Nutt’s former assistants, David Saunders and Chris Vaughn, participated in academic misconduct by arranging for six recruits to receive fixed ACT scores at Wayne County High School and then lied about their involvement.

Saunders received an eight-year show-cause penalty from the NCAA while Vaughn was fired from his post as Texas’ defensive backs coach last year. Nutt and the school spent the last four months in a legal spat after he filed a lawsuit alleging a breach of contract and defamation for what he believed was too much blame pinned on his tenure by the school in its initial response to the original NOA.

The case was dismissed in federal court and refiled in state court before the sides reached a settlement last month.