What is Ole Miss looking for in its next basketball coach? 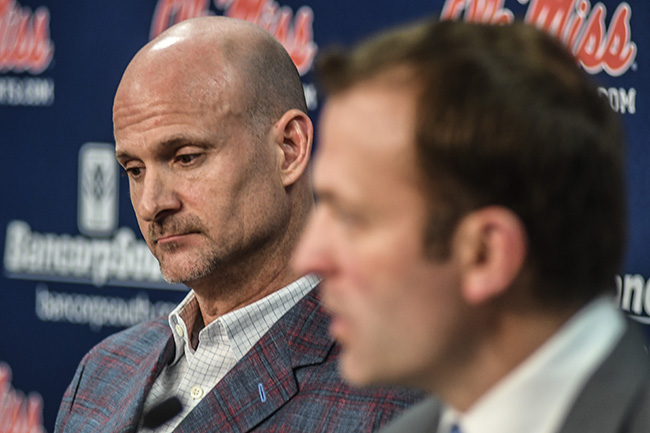 Ole Miss head coach Andy Kennedy, left, listens as athletic director Ross Bjork speaks at a press conference at the Pavilion at Ole Miss in Oxford, Miss. on Monday, February 12, 2018. Kennedy, in his 12th season as Ole Miss head coach, announced he would not return as coach following this season.(Bruce Newman, Oxford Eagle via AP)

Ross Bjork’s objective in replacing the most successful men’s basketball coach in Ole Miss history is to find one that will build on that success. That’s the task facing the Rebels’ athletic director after Andy Kennedy announced Monday he’ll be stepping down at the end of the season as the dean of SEC coaches.

Kennedy’s announcement comes with six games left in the regular season starting with Tuesday’s home tilt against Arkansas before the SEC Tournament in St. Louis. Barring an unexpected run to the league tournament title for an Ole Miss team that’s lost five games in a row and seven of its last eight, the Rebels’ season will end the second week in March, giving Bjork an extra month to conduct his search.

“We can now start,” Bjork said. “We’ll put a plan together starting (Tuesday). We’ll be aggressive in that plan, and we’ll go out and hire the best coach.”

As for the criteria Bjork is looking for in the Rebels’ next coach, he didn’t get too specific other than to voice the need for a strong recruiter. Asked if he’d ideally like a candidate that’s been a college head coach before or may even have NBA ties, Bjork reiterated he’s not closing himself off to anybody.

“This is a great job. This is a destination job,” Bjork said. “Now that we have (The Pavilion at Ole Miss), we have the Tuohy Center, we’ve got the SEC better than it’s ever been, this is an attractive job in college basketball. So we’ll go after the best coach whoever that is. What their background is will be determined, but we’re going to find the best coach.”

It’s the second hire Bjork has had to make in one of the big-3 sports (football, men’s basketball, baseball) during his tenure as athletic director after taking the interim tag off football coach Matt Luke in November — and one that comes with a different level of expectations given what Kennedy was able to accomplish during his 12-year tenure.

Kennedy will leave as the program’s all-time winningest coach after averaging more than 21 wins in his first 11 seasons at the helm. For perspective, Ole Miss had just three seasons with at least 21 wins in the 96 years before Kennedy arrived prior to the 2006-07 season. Under Kennedy, Ole Miss has at least a .500 record against 10 of the SEC’s other 13 teams, including a 13-11 mark against rival Mississippi State.

Kennedy, who’s never had a losing season at Ole Miss, has led the Rebels to two of the program’s eight NCAA Tournament appearances and 11 of its 20 postseason wins. Ole Miss made the postseason eight times in Kennedy’s first 11 seasons, including a run to the NIT quarterfinals last year.

The Rebels won the 2013 SEC Tournament to automatically qualify for the NCAA Tournament, but Ole Miss has only received an NCAA at-large berth once during Kennedy’s tenure. But Kennedy’s success at a program that hadn’t experienced much before he inherited it was a driving force in the construction of the Tuohy Center, a state-of-the art indoor practice facility, in 2010 and The Pavilion, a $96.5-million upgrade from the outdated C.M. “Tad” Smith Coliseum, in 2016.

They’re the kind of facility upgrades that Kennedy said makes the job more attractive than it’s ever been.

“The landscape has changed, and honestly I think the foundation is set,” Kennedy said. “It is ready to take that next step. I’m regretful that I couldn’t get it there, but I’m also accountable for that. I want to see it get there, and I think that it can.

“This job has never been better.”

Bjork said there’s no specific timetable in making a hire. He plans to use the extra time to take his time in finding the Rebels’ next coach.

“We know the landscape is always going to be changing,” Bjork said. “It’s different I think this year with all the things happening in college basketball, so I think you have to be very, very careful in your search process. Whatever the timeline is to hire the best coach, that’s what we’ll stick to.”

One thing that will have to be evaluated by the new coach is a crop of early signees that were inked by Kennedy and his staff for next season. The 2018-19 class includes four-star guard Serrel Smith, three-star forward Anthony Higgs and junior college prospects Brian Halums and Zach Naylor.

Bjork said Kennedy and his staff have been in contact with the signees to inform them of the situation, but none of them have been released from their scholarships.

“The hope would be that we hire a new head coach and that new head coach will talk to those signees and they’ll talk about what’s best for the program and for those young men,” Bjork said.