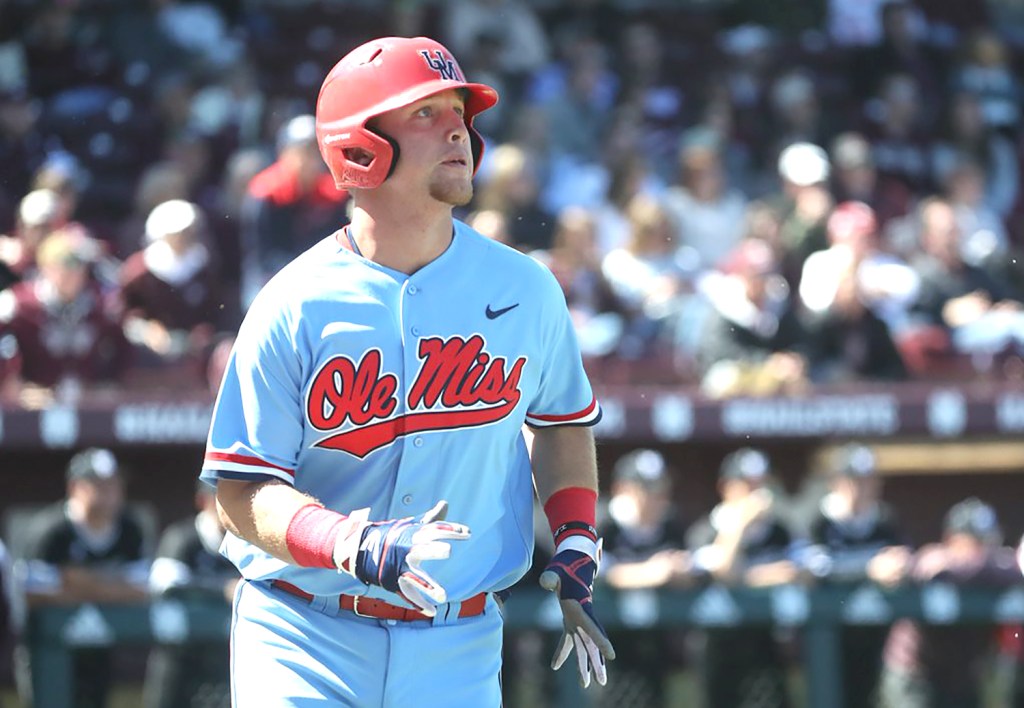 It took until early April, but Ole Miss is dealing with two losses in a three-game span.

The Rebels went at least six days between losses in the season’s first two months as Ole Miss won its first seven series to match the 2004 team for the best 30-game start in school history. But that streak ended over the weekend with Mississippi State taking the annual rivalry series from the Rebels for the third straight season.

Dropping a series was bound to happen sooner or later going through the gauntlet of an SEC that includes eight ranked teams, but it’s the way in which the fifth-ranked Rebels (27-6, 7-5 SEC) lost it in Starkville that head coach Mike Bianco hopes serves as a learning lesson for his team as it prepares to go through one of the toughest stretches of its schedule.

Mississippi State entered the weekend in the Western Division cellar with the SEC’s worst offense statistically but matched the number of runs it had scored in series openers all season in handing Ole Miss its worst loss in the first game of Saturday’s doubleheader. It was 10-2 after three innings with right-hander Brady Feigl allowing eight runs in his shortest outing of the season (2 ⅓ innings), and Ole Miss never mustered any kind of rally, finishing with just five hits.

Save for Ryan Rolison’s seven innings of one-run ball with nine strikeouts in the Rebels’ 6-1 nightcap win, the pitching and defense played behind it were far from clean. Ole Miss issued 12 walks and uncorked six wild pitches in the series while seven errors led to six unearned runs.

“You’ve got to play better,” Bianco said. “This is the SEC. Doesn’t matter who you play. Certainly in this series when you’re playing a rivalry series, but it’s the SEC and all the teams can beat you if you don’t play well enough.”

One of those errors helped Mississippi State erase a 3-2 deficit in the seventh inning of Sunday’s rubber game — one of two leads for the Rebels — but an Ole Miss team that’s had the knack for the timely hit this season more often than not had countless opportunities to add on fall by the wayside.

The Rebels had 16 hits and 12 at-bats with runners in scoring position but came through with hits in just three of those. Ole Miss left the bases loaded twice and stranded 12 baserunners before Luke Alexander’s walk-off home run in the 11th clinched the series for the Bulldogs.

“Another really good at-bat mixed in there and maybe we extend the lead a little bit,” Bianco said. “But we weren’t able to do that.”

The Rebels don’t have much time to dwell on it.

Ole Miss will continue an eight-game road trip Tuesday with a trip to Pearl for a 6 p.m. midweek rematch with No. 13 Southern Miss (22-9), a team the Rebels rallied from five runs down to beat, 7-6, in Oxford on March 27. Then it’s off to Nashville for the weekend to face No. 15 Vanderbilt (19-13, 7-5) in the first of three straight series the Rebels will play against ranked teams this month.

The Rebels will host the league’s most improved team from a record standpoint the following weekend in No. 18 Georgia, which is just three league victories away from matching its SEC win total last season and sits a game behind top-ranked Florida atop the Eastern Division standings. No. 23 LSU will visit Oxford April 26-28 with another trip to Pearl for the annual Governor’s Cup against Mississippi State, which has won eight of the teams’ last nine meetings, sandwiched in between those two series.

Bianco has seen enough resiliency from his team this season, particularly against quality competition, to believe it can quickly move on from one bad weekend. Ole Miss went 5-2 during a seven-game stretch against top-15 teams earlier this season, including a series win over No. 3 Arkansas to end March.

But the Rebels, who remained at No. 7 in the NCAA’s latest RPI rankings, will have to clean it up as they try to stay in the hunt for an SEC West title and a national seed.

“I think we’ll respond,” Bianco said. “It’s a tough month of April. We stay on the road and go Tuesday to Pearl. Playing the games down in Pearl make the games even more difficult with the midweek games, but we’ve got to be tough enough to handle it.”

Bianco said Monday that Rolison will move back to his usual Friday spot in the rotation this week while Feigl will return to his Saturday slot.

Bianco said he swapped the two last week because he felt like Feigl was pitching better. Feigl (6-2, 3.09 earned run average) allowed five earned runs — matching the most he’s given up in a start this season — on five hits while walking two, striking out two and throwing three wild pitches in his start Saturday while Rolison (4-3, 3.28) scattered six hits in matching his longest outing of the season.

Another one for Keenan

Third baseman Tyler Keenan was named SEC Freshman of the Week by the league office Monday, making it the second straight week Keenan has earned the honor.

Keenan hit .375 last week with six hits, four runs scored and three RBIs. He went 2-for-4 with a solo home run against Mississippi State on Sunday and has homered in three straight series finales.

Keenan is hitting .342 on the season with four doubles, four home runs and 16 RBIs.