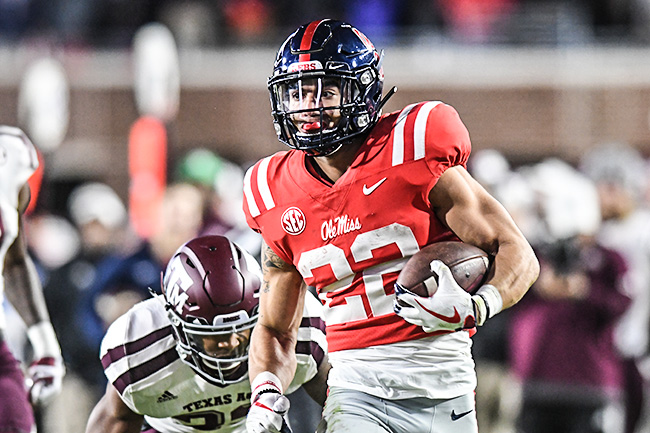 Jordan Wilkins has parlayed his most productive season at Ole Miss into a draft pick.

The Indianapolis Colts made the former Ole Miss running back the 169th overall selection in the NFL Draft on Saturday. Going with the 32nd pick of the fifth round, Wilkins is the second running back taken by the Colts, who drafted N.C. State’s Nyheim Hines a round earlier.

The 6-foot-1, 212-pound Wilkins is the third Ole Miss player to be drafted, joining defensive linemen Breeland Speaks (second round) and Marquis Haynes (fourth round).

Wilkins finished his career with 1,751 yards and 14 rushing touchdowns, but most of that production came in his only season as a full-time starter last season. After being ruled ineligible for his junior season after an academic credits snafu, Wilkins averaged 6.5 yards a carry while running for 1,011 yards and nine touchdowns as a senior, becoming the Rebels’ first 1,000-yard rusher since Dexter McCluster reached that mark in 2009.

“What he did this year after being ineligible, he was a model of consistency in the SEC,” ESPN analyst Mel Kiper Jr. said. “He changes gears, runs at a good pace, quick feet. Stays lows, runs between the tackles and fights for extra yards. As a pure runner, I like Jordan Wilkins an awful lot.”

Wilkins also had 241 receiving yards on 26 catches out of the backfield. Wilkins said last month he was also working on pass protection in order to round out his game.

Durability is somewhat of a concern after Wilkins suffered a season-ending knee injury his senior year of high school and various minor injuries at Ole Miss, but he started all 12 games a season ago.