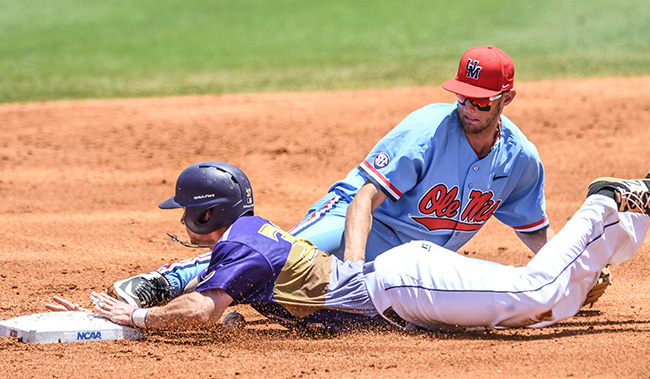 Tennessee Tech's Nick Osborne (37) is safe at second on a possible force play as the ball gets away from Ole Miss infielder Grae Kessinger (15) in the NCAA Oxford Regional, at Oxford-University Stadium in Oxford, Miss. on Monday, June 4, 2018. (Bruce Newman, Oxford Eagle via AP)

It’s Ole Miss and Tennessee Tech for a third and final time for the Oxford Regional championship.

Tennessee Tech (51-10) routed the Rebels in the teams’ first game Monday to set up a winner-take-all matchup at Oxford-University Stadium at 6:04 p.m. The teams have split their first two regional matchups with Ole Miss (48-16) winning Sunday’s game to advance to the championship round.

Check back here for updates throughout the game.

The winner will advance to face Texas in the super regionals this weekend. Ole Miss, which hasn’t lost consecutive home games all season, is looking for its first super regional appearance since 2014.

Ole Miss used four earlier today. None of them were Will Ethridge, Greer Holston, Houston Roth or Parker Caracci, who threw 48 pitches in 2 1/3 innings Sunday.

Top 9th: Osborne gets Keenan to fly out. Ole Miss gets the tying run on with Cockrell’s one-out single, but Osborne gets Adams to fly out and Kessinger to pop up to clinch a 3-2 win and give Tech the Oxford Regional title. The Golden Eagles will face Texas in this weekend’s super regionals. Ole Miss’ season ends at 48-17.

Bottom 8th: Caracci issues a leadoff walk, but a strikeout and a 6-4-3 double play send the game to the final inning.

Top 8th: Dillard draws a one-out walk, but Osborne strikes out Zabowski before inducing a groundout from Golsan. Ole Miss’ season is down to its final three outs.

Bottom 7th: Roth issues a leadoff walk before Alex Junior lays down a bunt to put runners at the corners. Roth is out, and Parker Caracci is in.

Caracci gets a strikeout before Kevin Strohschein drives one to the warning track in right for a sacrifice fly to give Tech the lead. 3-2 Tennessee Tech.

Top 7th: Two-way player Nick Osborne comes on to pitch for Tech and is greeted with Jacob Adams’ single. But Adams is erased on Kessinger’s 6-4-3 double play before Osborne gets Olenek swinging to keep it tied.

Bottom 6th: Fowler hits Chase Chambers with one out before Trevor Putzig sends one over the wall in left to tie it. That ends Fowler’s day. Houston Roth comes on for Ole Miss and gets back-to-back strikeouts to end the inning. 2-2.

Top 6th: Kessinger brings the crowd at Swayze Field to life with a leadoff home run to break the scoreless tie. Nick Fortes’ one-out single ends the day for Lancaster. Travis Moths is coming on for Tech.

Dillard greets Moths with a single to put runners at the corners before Zabowski follows with an RBI single to increase the lead. Moths walks Will Golsan to load the bases before striking out Keenan and Cockrell to limit the damage. 2-0 Ole Miss.

Bottom 5th: Another 1-2-3 inning for Fowler, who’s retired seven in a row.

Top 5th: A two-out single for Cockrell, but nothing else for Ole Miss.

Top 4th: Another 1-2-3 inning for Lancaster, who’s retired eight in a row.

Bottom 3rd: Fowler retires the first two batters before walking Chase Chambers. But Fowler gets out of the inning with some help from Kessinger, who makes a sliding stop in the hole at short before forcing out Chambers at second.

Bottom 2nd: David Garza leads off with a double and moves to third on Nick Osborne’s deep fly to center. Fowler issues a two-out walk before getting a popup to keep it scoreless.

Top 2nd: Will Golsan is plunked to start the frame, but Lancaster gets Tyler Keenan to roll into a 4-6-3 double play. Chase Cockrell flies out for the third out.

Bottom 1st: Tennessee Tech starts with back-to-back singles, but Fowler gets a strikeout and a pair of flyouts to wiggle out of trouble.

Top 1st: Lancaster hits a batter and gives up a two-out single to Thomas Dillard, but Cole Zabowski pops up to end Ole Miss’ threat.