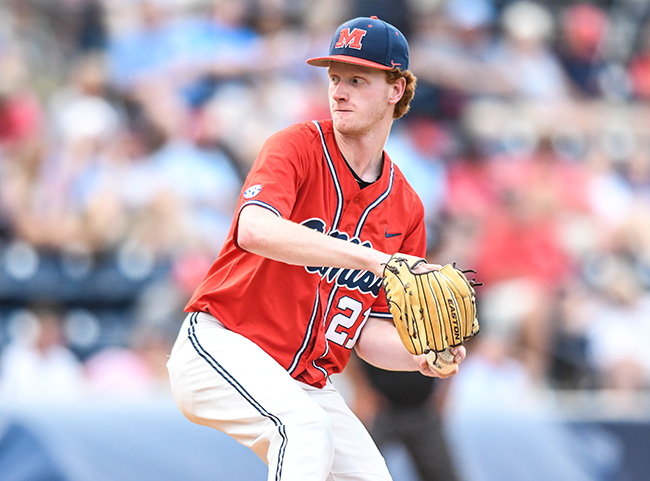 The end of another season comes with the departures that will affect college baseball rosters nationwide.

For Ole Miss, the biggest turnover will come on the mound.

The Rebels are losing their entire rotation to the professional ranks. Ace left-hander Ryan Rolison has signed with the Colorado Rockies for the full slot value of $2,912,300 after being the No. 22 overall selection in last week’s Major League Baseball First-Year Player Draft while right-hander James McArthur, who’s been the Sunday starter the last two seasons, has elected to forgo his senior season after being taken in the 12th round by the Philadelphia Phillies.

Brady Feigl, a fourth-year junior, signed for $300,000, according to MLB.com’s Jim Callis, after the Oakland Athletics drafted him in the fifth round with the 243rd overall pick. That pick came with a recommended signing bonus of $368,200.

Ole Miss coach Mike Bianco knew losing all three weekend arms to the draft was a possibility. Recent recruiting classes have helped him prepare for the future.

The leading candidate to move into the rotation is left-hander Jordan Fowler, who earned freshman All-American honors after a strong finish to the season. The Rebels’ midweek starter for most of the season, Fowler (7-0, 3.20 earned run average) pitched into the fifth inning in five of his last six starts and didn’t allow more than three earned runs in any of them.

The 6-foot-3, 170-pounder was at his best in the postseason, twirling six scoreless innings against Texas A&M in the SEC Tournament before holding Tennessee Tech to two runs over 5 ⅓ frames in the final game of the Oxford Regional. He struck out 34 and walked 18 in 45 innings while limiting opponents to a .237 average.

Other options include sophomores Will Ethridge, Greer Holston and Houston Roth. Ethridge and Holston made all of their appearances in relief this season while Roth made eight starts, most of those coming in the midweek before being moved to the bullpen late in the season.

But all three were starters in high school and recruited by Bianco and pitching coach Carl Lafferty to eventually assume that same role permanently at Ole Miss. Holston and Ethridge got a taste of it as freshmen, combining for 12 starts.

“I think the one thing that you’ll look at is the rotation and where do we go from here?” Bianco said. “The good news for us is that I think there will be plenty of choices when you look at Ethridge, Holston, Fowler and Roth — four guys I think in the program that all could start on the weekend. They’ve all started here. They just haven’t started on the weekend.”

Bianco also didn’t rule out the possibility of some newcomers getting a look starting with junior college signee Zack Phillips and prep left-hander Kaleb Hill. The draft claimed Ole Miss’ top pitching signee in Fivay High (Florida) right-hander Gunnar Hoglund, who told the Tampa Bay Times he’s agreed to terms with the Pittsburgh Pirates after being taken with the 36th overall pick.

“I think there will be six or seven guys we’ll watch throughout the fall to see how that’s going to play,” Bianco said.

We have inked a host of new players, signing 26 of our 2018 #MLBDraft picks including first-rounder Ryan Rolison and fourth-round pick Ryan Feltner.

Welcome to the Rockies family! pic.twitter.com/X0LsgpgP1Z