How confident is Ole Miss’ defense at the start of camp? 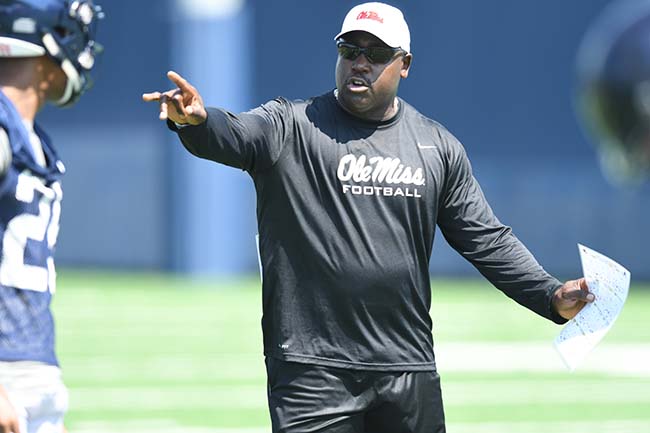 Continuity has been a heavy talking point among Ole Miss’ players and coaches heading into the Matt Luke era.

It’s what the Rebels are counting on to get more out of a defense that’s been among the nation’s worst the last two seasons.

Ole Miss has had one of the nation’s most productive offenses during that time, ranking at or near the top of the SEC in points and yards, but the Rebels went 5-7 in 2016 and 6-6 a season ago because they couldn’t offer much resistance. Ole Miss allowed 34 points on average over that span and has been near the bottom nationally in many statistical categories.

At the heart of the issue has been the Rebels’ inability to stop much of anything on the ground. Ole Miss ranked 120th out of 129 FBS teams in run defense two years ago before falling to 123rd last season, receiving the brunt of the frustration from fans

It’s only natural for confidence to take a hit when production is lacking to that extent, but despite the numbers, there are cohesive reasons why it’s trending in the other direction for the defense in fall camp.

McGriff is back for his second season calling the defense and has all but one of his assistants back from last season as well. Jon Sumrall replaced Bradley Dale Peveto as linebackers coach after Peveto left for the same post at Texas A&M, but Sumrall, who was hired in January, has already had a full spring with his group.

With the same system in place and more than half the starters on that side of the ball back to run it, there’s a higher comfort level and a better understanding of what’s expected from those who were around last year. At least there should be.

“I want to see a loud defense where they’re communicating. I want to see them playing fast and I want to see them eliminate the mental mistakes,” McGriff said. “The last thing I want to see is that I want them to understand and know where the help is coming from, know what your teammates are doing. It’s Year 2 now. You’ve got to be past just knowing your job. Where’s my help? The ball goes here, who’s my cutback guy? If you want to be a great defense, you not only have to know your job but the guy next to you. That allows you to do your job more effective and faster.”

Said linebacker Detric Bing-Dukes, “I feel like our confidence is way higher than it was in the spring. This is our second year in the defense, and I feel like everybody has a better understanding of where we need to be, how we need to click and how we need to communicate in order to dominate on the field.”

Of course, there are some key pieces that have to be replaced. Leading tackler DeMarquis Gates is gone as are Marquis Haynes and Breeland Speaks, who combined for half of the Rebels’ 29 sacks last season off the edge.

McGriff said converted linebacker Brenden Williams and sophomore Ryder Anderson are among those who have the ability to get after the quarterback, though the Rebels will have to plug up running lanes in order to create more opportunities to pin their ears back.

In order to do that, McGriff echoed the plan Luke revealed at SEC Media Days of committing more defenders in the box and playing man coverage on the back end. It’s a wrinkle the Rebels hope can help improve their numbers and allow the offense to spend more time on the field.

“We put the work in in the spring. It comes down to us,” Bing-Dukes said. “It’s not about what the other team does. It’s on us. I feel like as a whole, we’ve seen it, we’ve faced it and now it’s time for us to do it and to defeat it.”

Ole Miss has four more weeks to build on that continuity. The opener against Texas Tech on Sept. 1 will be the Rebels’ first chance to show whether it’s paid off, but it’s a starting point for a defense still looking to do its part.

“You look at last season with everything that was going on, the cloud that we were under and it being a new scheme and a new defensive staff, everything was new for them,” McGriff said. “But now I think now that they are sure, understand situational football more, understand our expectations of them, I think the confidence level is going to go to new heights.”