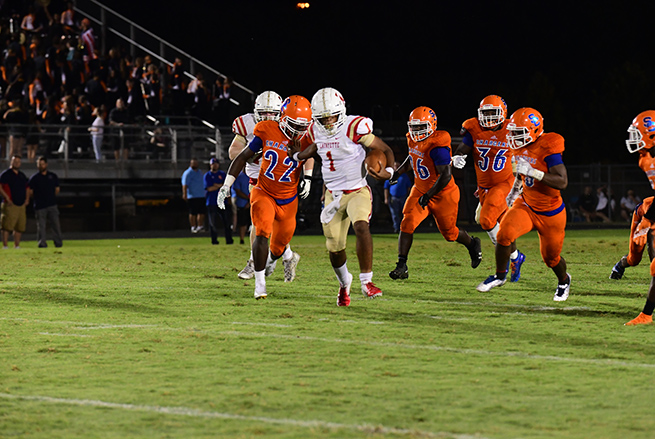 After a week on the road, both Lafayette and Oxford return to their home fields on Friday night for week three.

For Lafayette, they play their home opener on Friday night after spending the first two weeks of the season at Cleveland Central and at Southaven. Oxford opened their season at home two weeks ago, but welcomes another outing at Bobby Holcomb Field after a rough visit to Starkville last week.

Through two weeks of the season, both Oxford and Lafayette remain among the top-10 teams in the state. Lafayette rose to No. 5 in the state after their win over Southaven, Oxford fell to No. 10 after their loss to Starkville. Week three represents a bounce-back week for the Chargers and time for the Commodores to prove they can play with the big boys.

Lafayette plays a tough 2019 schedule. Horn Lake is one of two 6A teams the Commodores scheduled this season – they play Oxford a week from Friday. All this on top of the usual meeting with West Point that comes two weeks from Friday. This Friday, at home against Horn Lake is the start of that brutal, three-game stretch that gives them the chance to back up that No. 5 in the state ranking.

Horn Lake takes an inevitable step back this year from the team that went 15-0 a year ago, culminating in the 6A state championship. Gone from the 2019 Eagles are five-star linebacker Nakobe Dean (Georgia), four-star athlete Raydarious Jones (LSU), three-star running back Tyler Grim and a handful of other well-recruited players.

This iteration of Horn Lake is still talented, but they’re struggling right now to find their identity. The team opened the season by being blown out 34-6 by West Point at home. Week two they went to Cleveland Central, the same Cleveland Central that Lafayette beat 35-14 in week one, and narrowly squeaked out a 7-6 win.

Lafayette is always going to be a team that relies on the run game, and this team is no different. Over 90 percent of their total yardage through two games has come on the ground. It’ll be interesting to see how a run game that’s been so dominant holds up against 6A talent. The next three weeks will tell a lot about the ceiling of this Lafayette team.

Here’s the good news for Oxford: they played their toughest game of the regular season last week against Starkville. The offense was stagnant for much of the first half, and Starkville cut through the Oxford defense like a team playing a much inferior unit. However, the Chargers kind of fingered it out in the second half. Oxford scored 17 straight to cut the Starkville lead to just one touchdown, stopping the Yellowjacket offense in their tracks. The final score was not as indicative of how well Oxford played in the second half.

If that quarter-and-a-half against Starkville is any indication of the Oxford team, we’re going to see over the next few months, they have a lot of really good football in front of them. Grenada (2-0) comes to town playing good football, but they haven’t really played any sort of competition yet. The first priority for Oxford will be to slow down senior running back Demarquese Gibson. Through two games, Gibson is averaging nearly 140 rushing yards per game at a clip of 6.7 yards per carry.

South of Oxford, Water Valley is taking a rare bye week in week three. They had previously scheduled a game, but had it cancelled on them too late to find an additional opponent. The Blue Devils are 2-0, ranked No. 4 in 3A after last week’s 36-7 beat-down of North Pontotoc.