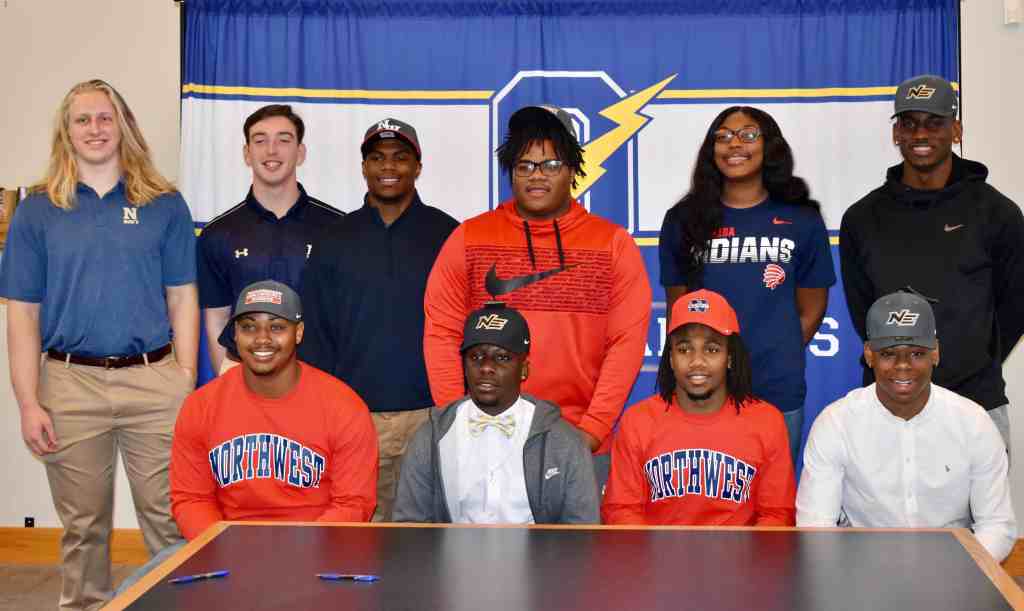 A group of 10 Oxford Chargers seniors will be continuing their athletic careers into their collegiate days.

Oxford High held a signing ceremony on Wednesday’s National Signing Day, the second signing window for athletes to send in their National Letter of Intent to play collegiate athletics.

Six football players from the Chargers’ 2019 6A State Championship squad will be continuing their football careers at two-year institutions, with two more – John Meagher and Clay Cromwell – signing to play with the United States Naval Academy. Of the six going to two-year institutions, four will be playing together at Northwest Mississippi Community College, whereas the other two will play together at Northeast Mississippi Community College.

The senior group will go down as arguably the best in the history of Charger football. Over their four years, the team amassed a 31-8 record and were the first group to both appear in the MHSAA 6A Playoffs (in 2018) and then the first team to win a state championship in school history in 2019.

On the basketball side, Kylan Blackmon signed on Wednesday to play his next pair of years with Northeast Mississippi Community College. It’s been a fantastic senior year for Blackmon, who’s averaging 26.1 points, 7.1 rebounds and three assists.

“It means a lot to make this official. For me, it shows all this hard work has paid off. But I have to keep going so that I can prove myself even more,” Blackmon said. “Northeast really just showed the most love. It was definitely the best situation for me, so that I can get to the next level after junior college, and I love the coaches there.”

For the girls, Calya Toles signed on Wednesday to play college basketball at Itawamba Community College. A four-year letterman, Toles’ 6-foot-1 frame makes her a lot to handle down low. She’s averaging 8.7 points, 11.4 rebounds and 4.6 blocks per game during her senior year. For Oxford, Toles is the first girls basketball signee since the 2015-16 school year.

Javian Gipson-Holmes: Northeast Mississippi Community College
A team captain for the 2020 season, Gipson-Holmes tallied 93 tackles, 20 pass deflections and five interceptions in his time as a Charger.

Scott Norphlet: Northeast Mississippi Community College
Norphlet was a tackle machine from the safety spot during his Oxford career. In the 2019 season alone, Norphlet recorded 116 tackles.

“This group, these guys, we fought for a long time together. This senior class, we went undefeated in eight grade and we were used to it. Then we pulled it off in the state championship,” Norphlet said. “This group means so much to me. But Northeast, for me, just felt like home.”

Byron ‘Tank’ Pearson: Northwest Mississippi Community College
Pearson graduates with the Oxford school record in return yards with 1,566 in his Charger career. A defensive back with great ball skills, he totaled 15 interceptions (also a school record) and 47 passes defended in his career. He’ll be one of the five headed to Northwest.

“A lot of us were trying to go to the same school. It’s hard to play with a whole bunch of folks that you don’t know, and we all feel so comfortable together. Now, we’ll still get to keep playing together.”

AJ Toliver: Northwest Mississippi Community College
One season as a Charger was enough for Toliver to move on to the next level. In his one year, Toliver recorded 44 tackles including 7.5 for a loss and 2.5 sacks.

“It means a lot to know that I’m going on to the next level and I have a bunch of teammates that I bonded with in high school,” Williams said. “That’ll be the biggest difference, going to college and playing with people that I’ve never known before. To still be able to have a couple of brothers on the team to count on is big.”