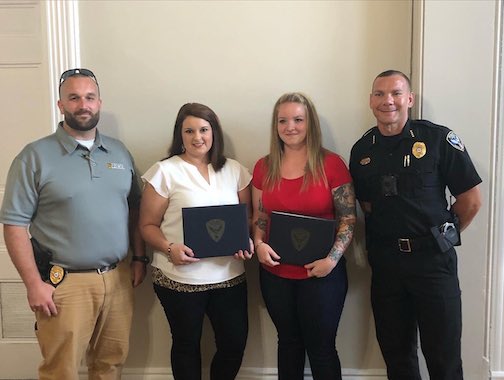 On Tuesday evening, the Oxford Police Department awarded two Delta Dog employees at the Oxford Board of Aldermen meeting for their actions during a shooting near University Avenue.

Shay Zinnecker and Jessica Bray were bestowed the Oxford Police Department’s Valor Award by OPD Chief McCutchen for their bravery in a dangerous situation.

On June 8, at approximately 10:44 a.m., the Oxford Police Department responded to the 300 block of Dede Drive for a report of shots fired. It was reported that multiple shots had been fired and one person had been shot in the leg.

According to McCutchen, Zinnecker and Bray responded to the area when the injured employee called them for help.

Once Zinnecker and Bray helped the injured employee inside, they proceeded to apply a makeshift tourniquet to the injured leg to stop the bleeding.

“When first responders arrived, the victim was in stable condition and good spirits because of the quick and brave actions of Ms. Zinnecker and Ms. Bray,” McCutchen said.

The OPD chief went on to call the employees’ actions brave and selfless and deserving of the Valor Award.

“I think it’s so important,” said McCutchen. “We always brag about the resources we have here in this community and how great they are, but they’re not great without great people and we have great people that live here and work here.”

Mayor Robyn Tannehill said the entire community is proud of Zinnecker and Bray and that she has a lot of respect for them.

“I’ve seen the video and I’m so touched at the way that you put your lives at risk to save your friend,” said Tannehill. “I wish we had a million other citizens just like y’all. Thank you so much and we’re very proud of you.”

The suspect in the shooting, Michael Burt, 69, of Oxford, was arrested by the OPD the day of the shooting and charged with felony aggravated assault.

Burt was issued a $75,000 bond by a Lafayette County Justice Court judge and is still in police custody.

(1/2) At tonight’s @cityofoxford Mayor and Board of Aldermen meeting, Shay Zinnecker and Jessica Bray were presented with the OPD Citizen’s Valor Award for their actions on the June 8th shooting off of University Ave. pic.twitter.com/VxQBTjnqQS