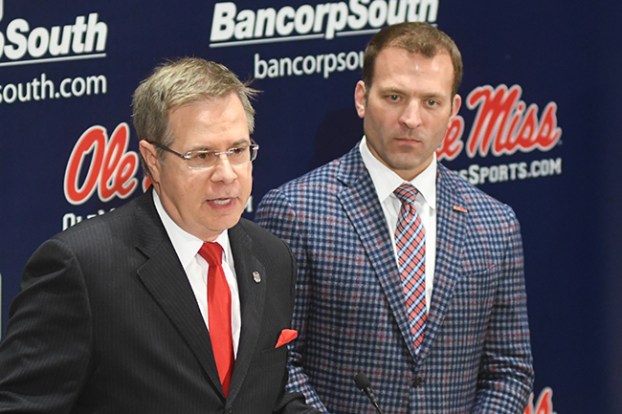 Ole Miss has enlisted some help as it begins the appeals process in its NCAA infractions case.

The university has added Mississippi-based law firm Butler Snow as well as Don Barrett of the Barrett Law Group to its legal team for the appeal of some of the findings and penalties doled out by the NCAA’s Committee on Infractions in its final ruling Dec. 1 as well as other related legal services, according to a statement released Friday by the school. Ole Miss is also filing written notice of its intent to appeal with the NCAA today, something it had 15 days to do from the time the ruling was handed down.

The services of Lightfoot, Franklin & White, a law firm based in Birmingham, Alabama, and New York-based firm Bond, Schoeneck & King were previously retained by the university.

“We have the best legal team in the country to handle our NCAA appeal,” Ole Miss Chancellor Jeffrey Vitter said in a statement. “We added Mississippi-based firms to further strengthen an already exceptional team so that we are in the best possible position to win this appeal. We believe the additional penalties imposed by the COI are unwarranted, which we will make very clear at the appropriate time in our written submissions on the merits of our appeal.”

The findings and penalties Ole Miss plans to appeal include another bowl ban for the 2018 season, a lack of institutional control and a recruiting restriction that would limit prospects to one unofficial visit per academic year. The school previously self-imposed a bowl ban this season, 11 scholarship reductions over a four-year period starting with the 2015-16 academic year (the NCAA docked 13 total scholarships in its final ruling) and three years of probation.

Ole Miss will have 30 days from the time the NCAA acknowledges the notice to file its initial appeal. The appeals committee panel then gets 30 days once it receives the appeal to issue a response before the school gets 14 days to submit a rebuttal if it chooses. Athletic director Ross Bjork estimated when the NCAA’s final ruling came down that the appeals process could take anywhere from three to six months.

Former administrative staffer Barney Farrar on Friday also filed a notice to appeal his five-year show-cause penalty, according to a statement from his attorney, Bruse Loyd. Farrar, who was hired by Jones County Junior College on Thursday, was named in four Level-I charges, including allegations that he and former defensive line coach Chris Kiffin arranged for Mississippi State players Kobe Jones and Leo Lewis as well as Lindsey Miller, Laremy Tunsil’s stepfather, to receive $2,800 worth of free merchandise from Rebel Rags and arranged for Lewis to receive at least $10,000 in cash payments from a booster when he was a recruit.

Kiffin, now the defensive coordinator at Florida Atlantic, received a two-year show-cause order but will not appeal it.

Xavier athletic director Greg Christopher, who served as the chief hearing officer for Ole Miss’ case, cited booster culture as one of the main reasons for the penalties being what they were when the COI’s final ruling came down, saying, “This case strikes at the heart of what college sports stands for and is a direct result of a culture where rules violations were an acceptable part of the Ole Miss football program.”

Fourteen boosters were identified in the amended Notice of Allegations the school received in February. Six of them have been disassociated indefinitely.