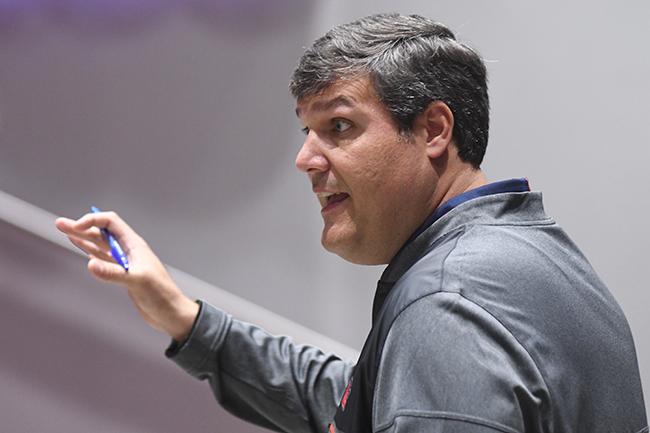 The numbers aren’t going to blow away Ole Miss fans. They were never going to.

As of Wednesday evening, after the first day — and, for Ole Miss, the only day — of college football’s inaugural early signing period, Ole Miss has the nation’s No. 35 recruiting class, according to 247Sports’ composite team rankings. It’s also only good enough for 12th in the Southeastern Conference.

It could’ve been worse. The Rebels’ 12-member class (which turned into 15 signees) began the day outside the top 60 nationally and dead last in the talent-rich SEC.

In other words, Ole Miss coach Matt Luke and his staff did yeoman’s work on the recruiting trail with the odds stacked against them.

It’s no secret why Ole Miss, after reaching unprecedented recruiting heights under former coach Hugh Freeze, is in line to sign its second straight class that will rank in the 30s instead of the teens or higher. The school received its initial Notice of Allegations in the NCAA’s investigation into the football program just as the Rebels were putting the finishing touches on their 2016 recruiting class, and many recruits have been understandably hesitant in the 23 months since then not knowing what the end result would be until the NCAA handed down its final ruling Dec. 1, which was just as much of a problem for Ole Miss as the probe itself when it came to trying to answer the litany of questions recruits and their families had about the future of the program.

The penalties, which included another bowl ban for next season and 13 scholarship reductions over a four-year period (four reductions for the 2018 class), came down five days after Ole Miss ended what was a season’s worth of uncertainty about who the Rebels’ permanent coach would be by deciding to remove Luke’s interim tag.

“I think the biggest fear for people is the fear of the unknown,” Luke said. “Once people know what it is, they can move forward. I think that’s where we were.”

It left less than three weeks for Luke and his staff to try to reignite some of those recruiting relationships ahead of Wednesday, which is what makes the Rebels’ haul to this point impressive.

California four-star quarterback Matt Corral was the first big domino to fall with everything out in the open, flipping his commitment from Florida last week before making it official Wednesday. Ole Miss added a second four-star receiver with Elijah Moore’s flip from Georgia, made some in-state noise by flipping Callaway three-star defensive lineman James Williams from Mississippi State and signed two of its top targets in Alabama four-star lineman Jalen Cunningham and junior college linebacker Vernon Dasher to further address the deficiencies on a defense that finished outside the top 100 nationally this season in scoring defense, total defense and run defense.

“It’s all about need,” Luke said. “The problem we had is we had very, very limited mid-year spots where guys could come in and perform in spring practice, so we knew we had to get a quarterback, we had to get a d-lineman and we had to get a linebacker. Those were three huge positions of need.”

There’s still a lot of work to do with plenty of needs left to fill for a team that’s a combined 11-13 over the last two seasons. The traditional signing period is less than two months away with Luke estimating the Rebels could sign eight or nine more players to round out the class.

Once that’s over, Luke and his staff will move on to a 2019 class that will be assembled free of any bowl ban talk and will begin to set the tone for Luke’s tenure.

Whether Luke was the right hire at Ole Miss will be determined in time. There are more games to coach and more recruits to sign. But Luke’s first official order of business as the Rebels’ permanent coach Wednesday created the kind of momentum for the program that hasn’t existed since that Sugar Bowl win two years ago.

It could be remembered as the moment Ole Miss regained its footing in the ultra-competitive SEC if he can keep it going.