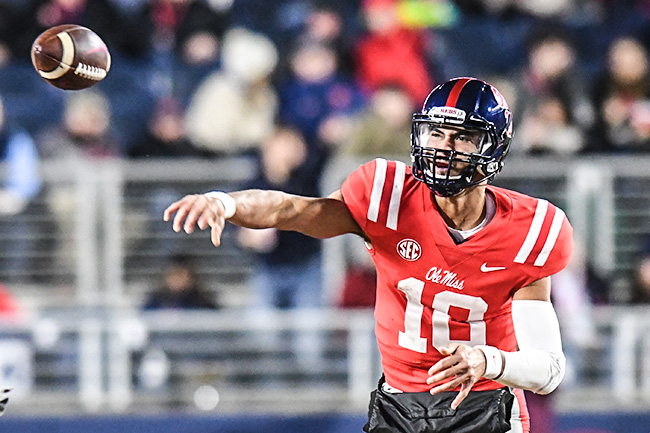 Editor’s note: This is the first in a seven-part series previewing each position for Ole Miss heading into spring football practice, which begins Feb. 27.

This wasn’t supposed to be Jordan Ta’amu’s offense.

With its backup quarterback options limited heading into last season, Ole Miss signed Ta’amu out of the junior college ranks to add experience and depth behind former five-star signee Shea Patterson, the Rebels’ long-term plan at the position.

Ta’amu was forced into action midway through the season when Patterson suffered a season-ending knee injury and more than held his own, accounting for 1,847 total yards and 15 touchdowns in helping lead the Rebels to a 3-2 record in their final five games. Patterson transferred to Michigan once the NCAA’s Committee on Infractions hit the Rebels with an additional bowl ban as part of the final ruling issued in the school’s infractions case, leaving Ta’amu entering his first spring as the man behind center.

Ole Miss’ offense didn’t skip much of a beat when Ta’amu took over. The 6-foot-2, 212-pounder flashed his dual-threat ability at times with four rushing touchdowns but did most of his damage with his arm, throwing for 1,682 yards and 11 scores for the SEC’s top passing offense. He completed nearly 67 percent of his passes and kept his mistakes to a minimum with just four interceptions — decision-making that should only improve with more experience.

That’s not something the Rebels have a lot of behind Ta’amu, the most seasoned quarterback on the roster despite having played just eight games for Ole Miss. Jason Pellerin, who moved back to the position once Patterson went down after spending last spring at receiver, is still listed as a quarterback on the roster but hasn’t taken a snap behind center since the 2016 season. Even then, Pellerin attempted just 22 passes with more interceptions (3) than touchdowns (2) through the air, serving more as a running threat in short-yardage and goal-line packages.

Freshman Alex Faniel, the biggest quarterback on the roster at 6-6 and 248 pounds, will begin the spring as Ta’amu’s backup after redshirting last season. He was one of just three scholarship quarterbacks left following Patterson’s departure before Ole Miss coach Matt Luke signed U.S. Army All-American quarterback Matt Corral out of California.

Corral, the highest-ranked signee in the Rebels’ latest recruiting class, enrolled early and will immediately add to the competition this spring. Luke said Corral has already impressed with his arm talent since arriving on campus, something that could give the 6-3, 205-pounder a chance to quickly move up the depth chart.

A true pocket passer, Corral, a one-time Florida commit, completed more than 62 percent of his passes for 2,495 yards and 29 touchdowns against just seven interceptions as a senior at Long Beach Poly High.

Ole Miss will also begin the spring with two walk-ons at the position in Grant Restmeyer and junior college product Jacob Carter.

Turnovers doom Lafayette boys in first round loss of…