How did the MLB Draft affect Ole Miss’ roster? 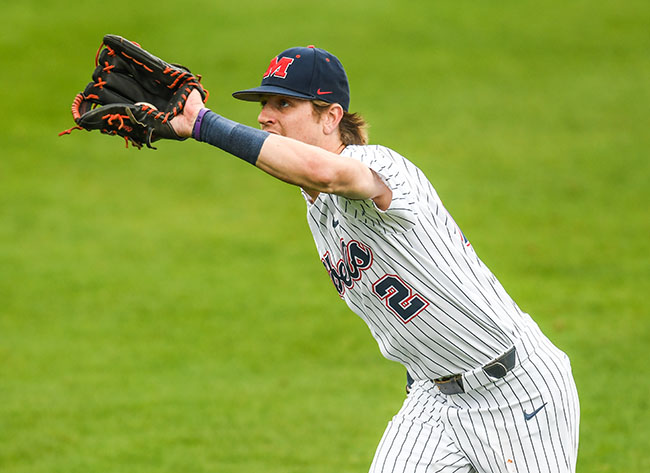 Ole Miss’ Ryan Olenek makes a catch for an out against New Orleans at Oxford-University Stadium in Oxford, Miss. on Tuesday, March 20, 2018. Ole Miss won 9-4 to improve to 20-2. (Bruce Newman, Oxford Eagle via AP)

The decisions are in.

Ole Miss had seven players taken in Major League Baseball’s First-Year Player Draft earlier this month with six of them being underclassmen. Outfielder Will Golsan was the lone senior selected while the $2.91 million slot value that came with Ryan Rolison going No. 22 overall to the Colorado Rockies made the sophomore left-hander’s departure a foregone conclusion.

Catcher Nick Fortes made the expected move of bypassing his senior season to sign with the Miami Marlins after being taken in the fourth round, leaving former prized signee Cooper Johnson as the heir apparent at the position. The Rebels will also have to replace their entire weekend rotation after fifth-round pick Brady Feigl and 12th-round selection James McArthur recently agreed to terms with the Oakland Athletics and the Philadelphia Phillies, respectively.

The final decision came Tuesday from right fielder Ryan Olenek, who announced with a post to his Twitter account that he’ll return for his senior season after being taken by the San Francisco Giants in the 17th round. Olenek is the second key piece set to return next season with closer Parker Caracci also deciding to put his professional career on hold after the Toronto Blue Jays drafted him in the 37th round.

Neither of those decisions is surprising given where Olenek and Caracci were drafted — there are no recommended signing bonuses for picks outside the top 10 rounds — and the leverage both have to improve their draft stock next year. Olenek, who could move back to center next season with Golsan gone, enjoyed a breakout season at the plate in which he led the Rebels in average (.350) and doubles (18), though it’s a small sample size for a player whose position is uncertain at the next level.

Caracci broke onto the national scene in his first season on the active roster with 10 saves, but the hard-throwing right-hander still has two years of eligibility left. With a fastball that can touch the mid-90s, Caracci struck out 73 and walked 14 in 48 innings this season while holding opponents to a .221 average.