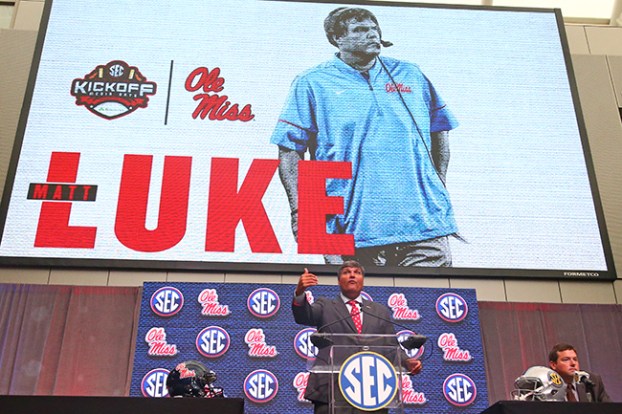 Matt Luke didn’t have much time to prepare for his first season in charge at Ole Miss.

Friday will mark a year since Luke, then the Rebels’ offensive line coach, was promoted to interim coach the same day Hugh Freeze abruptly resigned amid an escort scandal. That left just a couple of weeks for Luke to adjust on the fly before the start of fall camp.

“It doesn’t come with a handbook,” Luke said, “so you learn things by experience.”

Entering his first season as the permanent coach after having the interim tag removed days after Ole Miss’ upset of Mississippi State, Luke has a head start on that learning curve after being thrown into the fire last summer. The Egg Bowl win gave Ole Miss three in its last four games to cap a 6-6 season overshadowed by penalties stemming from the NCAA’s long-running investigation, including a postseason ban that, should Ole Miss at least equal that win total, will also keep the Rebels out of a bowl this season if it’s not reversed on appeal.

It’s momentum for a team Luke knows well given his well-documented ties to Ole Miss as a player and coach. There’s also familiarity with a coaching staff that Luke kept intact this offseason, giving a roster with more than half its starters back another year of comfortability in Phil Longo’s offense and Wesley McGriff’s defense heading into camp next month.

“I think continuity in this day and age is very important,” Luke said. “I thought it was very important having the same system on offense and defense. … Really just trying to build on what we started at the end of last season.”

Luke is still working on his first full recruiting class — the Rebels have 24 commitments for the 2019 cycle — after scrambling to keep recruits in the fold and adding a few of his own to this year’s class amid the coaching change. Learning how to manage everything else that goes with his coaching duties is where last year helped the most for Luke, who’s also coached under former Tennessee coach Philip Fulmer and Duke’s David Cutcliffe while also leaning on interim-turned-permanent Clemson coach Dabo Swinney.

“You take a little bit from everybody you’ve been around and put your own flavor with it and there it is,” Luke said. “But obviously it will be easier to handle all the time constraints that you’re under. That was, for me, the biggest challenge — dealing with the media, dealing with recruiting and dealing with your players. I think that will all be one year better.”

But one thing Luke already knew was how he wanted to go about implementing his culture within the program. Players working for the benefit of the team instead of themselves is non-negotiable, a natural mindset for the former offensive lineman that’s resonated with a team trying to make itself relevant again in the rugged SEC West.

“I tell people all the time that personally he has not changed a bit,” center Sean Rawlings said. “He still has that same selfless mentality and stands by what he believes in. That’s being mentally tough, blue collar and nobody gets the credit. I can’t say that enough because he’s made everybody in the locker room be a firm believer in that, and you see people start to buy into that. It’s just so much respect and so much pride in playing for coach Luke.”

ATLANTA — Shea Patterson stepped on the podium, sat down behind the microphone and fielded nearly 20 consecutive minutes of... read more