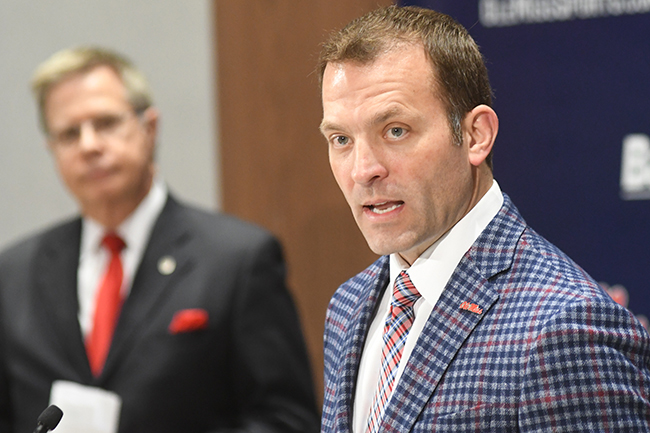 More than four months after issuing final penalties in the football program’s infractions case, including a multi-year bowl ban, the NCAA’s Committee on Infractions is standing behind them in response to the school’s written appeal.

Ole Miss challenged the two-year postseason ban — the school previously self-imposed a bowl ban for the 2017 season — the charge of a lack of institutional control and a recruiting penalty that would limit prospects to one unofficial visit per academic year for the length of the school’s probation period, which runs through Nov. 30, 2020. The school also disputed in its appeal filed in February the finding that Oxford-based retailer Rebel Rags provided thousands of dollars worth of impermissible benefits to recruits and their family members, but the COI stood behind that as well, stating in its response the findings being appealed were “not clearly contrary to the information in the record.”

The COI also claimed it did not abuse its discretion in doling out the multi-year bowl ban and the recruiting penalty given the breadth of the violations, adding that each of Ole Miss’ arguments is flawed.

“Nothing in the COI’s past cases or this committee’s considerations for when violations occur and penalties are most appropriate requires a different conclusion,” part of the response read. “In challenging the two violations and the scope of the two penalties, Mississippi ignores and attempts to second guess legislated standards. Its arguments fail.”

Ole Miss gave notice of its intent to appeal two weeks after the COI issued its final ruling in December and filed its appeal Feb. 5. The COI originally had 30 days from the time it received the school’s written appeal to respond, which made for a timeframe of early March, but the response didn’t come until last month after the COI was granted a 30-day extension.

The school publicly released the COI’s response Wednesday, but the appeals process isn’t over.

Ole Miss has filed a rebuttal to the COI’s response, arguing the panel abused its discretion by breaking away from precedent and putting an emphasis on the school’s infractions cases in 1986 and 1994 to “erroneously infer the existence of ‘an out-of-control culture that has existed for decades'” in assessing the two-year bowl ban. The COI has 10 days from the time it received the rebuttal to respond to in writing before the school has a hearing in front of the Infractions Appeals Committee, meaning it will be some time this summer before the appeals committee makes its final decision.

“In the single paragraph devoted to this conclusion in its response, the COI is wholly unable to direct this (appeals) committee to any case where decades-old infractions decisions have been used against an institution, as the COI did here, to justify the imposition of a penalty as severe as a postseason ban,” part of Ole Miss’ rebuttal read. “Under this standard, every NCAA member, once sanctioned, would be subject to enhanced penalties forever. In the face of the university’s initial submission, the COI’s only response is to ignore the overwhelming amount of precedent that runs counter to its conduct in this case. The COI’s silence speaks volumes.”

Whenever the appeals process is exhausted, it will bring to an end the fallout of a nearly five-year investigation that resulted in the program being charged with 21 rules violations. Fifteen of those were Level-I charges, including the Rebel Rags allegation, which accused former administrative staffer Barney Farrar and former defensive line coach Chris Kiffin of working with the store to provide $2,800 worth of free merchandise to Mississippi State players Leo Lewis and Kobe Jones and Lindsey Miller, the stepfather of former Ole Miss All-American Laremy Tunsil, during recruiting visits.

The COI harped on the amount of booster involvement in sticking with the enforcement staff’s finding of a lack of institutional control, referring to Ole Miss’ booster culture as “unconstrained” as part of its final ruling. Six of the 14 boosters involved in the case, including Rebel Rags, were disassociated indefinitely by Ole Miss in December, but the school later reinstated Rebel Rags pending the outcome of its appeal.

Rebel Rags is suing Lewis, Jones and Miller as well as former Mississippi State coach Dan Mullen, former MSU athletic director Scott Stricklin, investigator Mike Sheridan and the NCAA itself for defamation, commercial disparagement and civil conspiracy. Petitions for interlocutory appeals made by Lewis and Jones seeking severance and change of venue in the case were denied last month by the Mississippi Supreme Court.

Farrar was also accused in a separate allegation of arranging cash payments totaling $15,600 between two unidentified boosters and Lewis. Farrar, who was fired in December of 2016 and recently hired at Jones County Junior College, was issued a five-year show-cause penalty while Kiffin, now the defensive coordinator at Florida Atlantic, was given a two-year show-cause order.