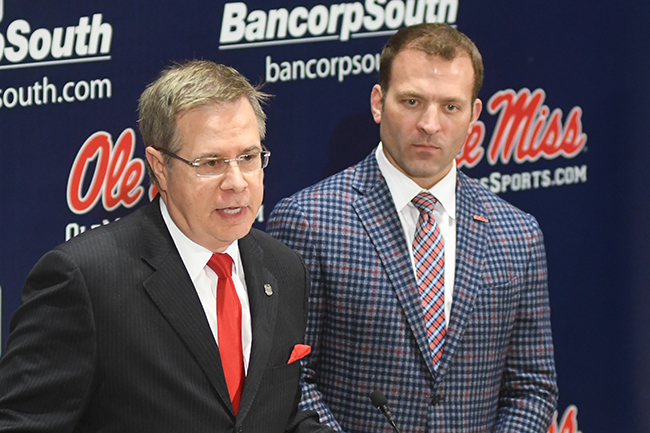 Ole Miss’ appeal is in.

The school filed its written appeal with the NCAA in its football infractions case Monday  — more than two months after receiving a multi-year bowl ban as part of the Committee on Infractions’ final ruling. Ole Miss filed a notice of its intent to appeal on Dec. 15 with the NCAA acknowledging it during the first week of January, starting a 30-day window in which the school was required to submit its appeal.

The COI has 30 days from the time the appeal is received to issue its response. Ole Miss will have 14 days after that to provide a rebuttal before an in-person hearing is scheduled.

In addition to the bowl ban for the 2018 season, which was added on to the postseason ban the school previously self-imposed for the 2017 season, athletic director Ross Bjork has said Ole Miss would appeal a charge of a lack of institutional control and a recruiting restriction that would limit prospects to one unofficial visit per academic year for the duration of the program’s probation, which runs through 2020, though there could be more.

The EAGLE has submitted a public records request for a copy of the appeal. Bjork said the school will publicly release the document later this week or early next week.

Only penalties and findings can be appealed. Ole Miss cannot introduce any new evidence during the appeals process that wasn’t a part of its hearing with the COI.

The appeal comes 66 days after the COI handed down its final penalties, which also included an increase to 13 scholarship reductions over a four-year period ending in 2018, the vacation of any wins in which ineligible players participated and a $179,797 fine. The school also self-imposed the disassociation of involved boosters, including six who have been disassociated indefinitely.

Rebel Rags and owner Terry Warren were disassociated for the length of the probation period but have been reinstated pending the outcome of the appeal. The NCAA allows schools to hold off on penalties that are being appealed until a final verdict is reached.

The NCAA levied 21 allegations against Ole Miss in the case, most of which occurred during Hugh Freeze’s five-year tenure as head coach. Lack of institutional control was one of 15 Level-I charges — the most serious in the NCAA’s classification system — levied against the program.

Freeze, who resigned amid a female escort scandal in July and remains unemployed, was issued a one-year suspension in which he would be suspended for the first two conference games next season should another school hire him as a head coach. Former administrative staffer Barney Farrar was hit with a five-year show-cause penalty while former defensive line coach Chris Kiffin was given a two-year show-cause order.