Is Ole Miss capable of halting slide down the stretch in improved SEC? 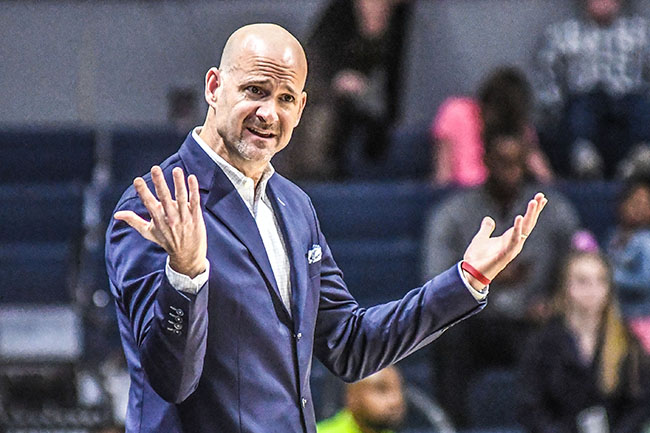 Terence Davis was among those who bought in to Ole Miss’ blend of experience and talent before the season started, citing it as the primary reason why he believed the Rebels would once again upset the 10th-place finish the media predicted for Ole Miss in the Southeastern Conference in the preseason and contend for a postseason berth.

So count the Rebels’ junior guard among those who’ve been surprised that Ole Miss’ season is trending in the opposite direction.

“All we talked about was how special this group was going to be,” Davis said. “We had so many weapons and we still have weapons. We’re just not putting it to use.”

Davis, the Rebels’ leading scorer a season ago, returned as one of four upperclassmen back from a rotation that spearheaded Ole Miss’ NIT quarterfinal run last season, including fifth-year senior Deandre Burnett — a rarity in college basketball. The Rebels added another senior in former Memphis wing Markel Crawford, one of the nation’s most sought-after graduate transfers, to go with 7-foot addition Dominik Olejniczak, junior college All-American Bruce Stevens and freshman guard Devontae Shuler, a top-150 national recruit.

But rarely has it added up to wins in a new and improved SEC, one ESPN analyst Joe Lunardi predicts to have eight teams in the NCAA Tournament in his latest bracket projections. Ole Miss (11-13, 4-7 SEC) has lost six of its last seven games and will take a four-game losing streak — its longest of the season — to LSU on Saturday (3 p.m., ESPNU).

The skid started with a loss at NCAA Tournament hopeful Texas in the Big 12-SEC Challenge in late January and has included setbacks to No. 8 Auburn, No. 18 Tennessee and, most recently, Missouri, but Ole Miss’ issues go beyond the quality of competition.

Ole Miss is 283rd out of 351 Division I teams in points allowed (76.7), 261st in 3-point field-goal percentage defense (36.3) and 225th in rebounding margin (minus-0.4), and the Rebels aren’t getting enough consistency from a backcourt that head coach Andy Kennedy touted in the preseason as perhaps the best he’s had in his 12-year tenure to overcome those deficiencies. Burnett (14.4 points per game) and Davis (13.8) are leading Ole Miss in scoring while Crawford, Shuler and point guard Breein Tyree are also averaging more than 19 minutes a night, but efficiency has been a problem with Davis (41.6 percent) being the only one shooting better than 40 percent from the field. In conference games, Burnett and Davis are each shooting it at just a 35.8-percent clip.

“Three of the five (guards) have to play a B-plus game for us to win another one or we won’t win another game,” Kennedy said. “I know that.”

Execution and awareness have also been absent far too often during critical stretches, something Kennedy said has baffled him all season about a team with this much experience. Kennedy said the effort from his team has been there all along, but one area in particular that opponents have consistently beaten the Rebels in is loose balls, or what Ole Miss’ coaching staff charts as 50-50 balls that result in extra possessions for whichever team comes up with them.

Kennedy said Missouri “doubled us up” in that department Tuesday night in the Tigers’ 75-69 win, which played a part in the Rebels letting another one slip away at home. Of Ole Miss’ five home losses, four have been decided by two possessions or less.

“Our awareness needs to get better,” Kennedy said. “How many times does the ball just seem to be (loose) … and if you’re pulling for Ole Miss, you’re saying ‘Get the ball, get the ball, get ball,’ and we just never get it.

Playing away from home has also proven to be an exercise in futility so far for the Rebels, who’ve yet to win a true road game in seven tries this season. Their last two setbacks outside of The Pavilion have come by an average of 23 points while LSU (13-10, 4-7) knocked off Texas A&M and Arkansas, another pair of NCAA hopefuls, in its last two home games.

“We’re going on the road and haven’t had an SEC road win this year,” Davis said. “We’ve got to come together and find a way.”

The schedule doesn’t get any easier with LSU being one of just two sub-60 RPI opponents left on the regular-season slate, but the Rebels have seen some of them before. Ole Miss will return home Tuesday to take on Arkansas after falling to the Razorbacks by four last month in Fayetteville. The Rebels will then head to Starkville to take on a Mississippi State team they beat 64-58 on Jan. 6 in Oxford before making a return trip to Missouri on Feb. 20 for a rematch with the Tigers.

“I feel like we can beat anybody (in the SEC),” Davis said. “It’s just that we’ve got to go actually do it. It’s another thing to talk about it. You’ve got to be about it.”

There’s also a rematch with Tennessee at The Pavilion on Feb. 24 and a trip to Kentucky on Feb. 28 before the Rebels end the regular season at home against Vanderbilt on March 3, so turning it around will require a program that’s trying to avoid its first losing season under Kennedy to dig deep.

“The one thing we can’t do is feel sorry for ourselves because no one feels sorry for us,” Kennedy said. “This is big-boy basketball.”