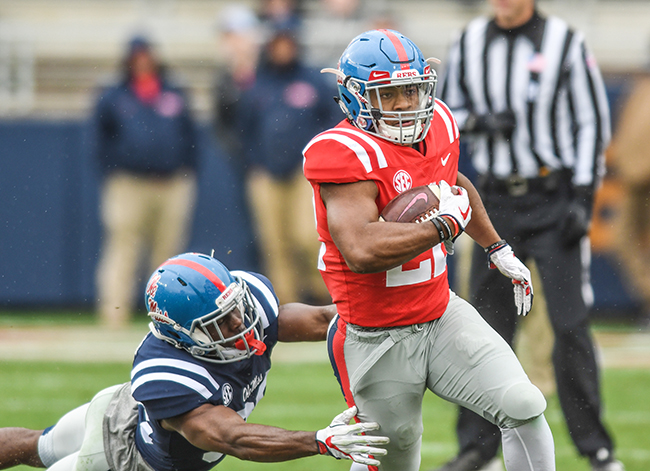 Matt Luke liked what he saw from his running backs this spring. So much so that Ole Miss’ coach may have a harder time determining a pecking order come the fall than he originally thought.

Luke and running backs coach Derrick Nix got extended looks at Eric Swinney, Scottie Phillips, Isaiah Woullard and Armani Linton during a spring that concluded with the annual Grove Bowl on Saturday. Coaches are looking for someone to emerge as the No. 1 back with the Rebels having to replace the program’s first 1,000-yard rusher in nearly a decade in Jordan Wilkins, who ran for 1,011 yards last season before running out of eligibility.

Luke said 15 spring practices didn’t lend themselves to anyone beginning to separate himself in the competition, but it was enough time for him to become encouraged with the Rebels’ options at the position.

The most experienced options are Swinney and D’Vaughn Pennamon, who have combined for 115 career carries heading into their junior seasons. Pennamon didn’t participate this spring as he continues to recover from surgery on a dislocated knee but is close to getting his full range of motion back and is on track to rejoin the backfield during fall camp, Luke said.

Swinney filled in as the backup running back late last season in Pennamon’s absence and could be the favorite to ascend to the top of the depth chart, but both have new competition from Phillips, Woullard and Linton.

Luke mentioned Phillips, a junior college transfer, as a newcomer who could make perhaps the quickest impact come the fall, a sentiment that was only strengthened with a strong spring from the 5-foot-8, 212-pounder, who said he fielded interest from Miami, LSU, Connecticut and others before ultimately deciding to stay in state after rushing for 2,282 yards and 27 touchdowns the last two seasons at Jones County Junior College.

The biggest adjustment for Phillips and Woullard has been getting acclimated to the speed of the college game at the Power-Five level, particularly for Woullard, who’s still transitioning from the private-school ranks of Mississippi high school football to the SEC after grayshirting last season.

“That’s a big jump,” said Woullard, who finished his career at Hattiesburg’s Presbyterian Christian School as the state’s all-time leading high school rusher. “It’s been hard, but I think I’ve competed and shown my worth.” 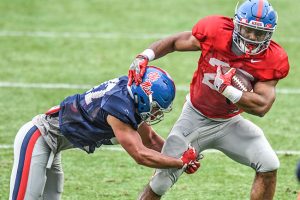 Phillips described himself as a “one-cut, downhill back” who could also be a viable option in the passing game. Both Phillips and Woullard impressed throughout the spring with physical running styles despite being smaller backs.

“All of us are pretty good backs,” Phillips said. “I embrace the competition, and I feel like all of us can contribute. I’ll do anything I can do to help this team. If that’s being the starter to the second string to special teams, anything I’ve got to do to help the team, I’ll do it.”

Linton moved from safety at the beginning of the spring and instantly became the biggest back on the roster at 6-2 and 218 pounds. He was slowed by a hamstring injury early but finished the spring with five carries for 35 yards in the Grove Bowl. Phillips, who shared most of the first-team reps with Swinney this spring, had 40 yards on a game-high nine carries, Woullard carried five times for 20 yards, and Swinney had 32 yards on seven carries.

“They kind of stood out to me the very first week of practice,” Luke said. “You saw a few flashes from Scottie out there in the open field (in the Grove Bowl) and you saw his burst. You some toughness from Isaiah Woullard. Even though he’s a little guy, he does fall forward. Very pleased with the production in that room.”

Senior D.K. Buford, who was held out of spring drills with a shoulder injury, will return to join a competition that will start in earnest again in the fall.

“I’m cautiously optimistic,” Luke said. “You still want to get in the season and see. You can never have enough running backs because they do get injured, but I’m very impressed with what I’ve seen so far.”