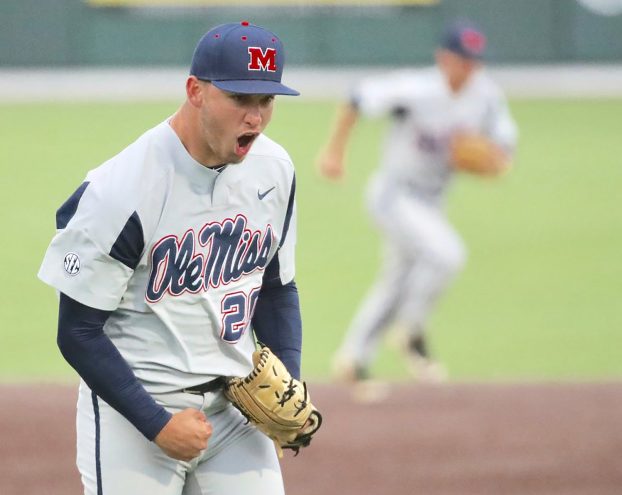 Ole Miss' Will Ethridge reacts after getting an out during Game 2 of a doubleheader against Vanderbilt on Sunday, April 15, 2018, at Hawkins Field in Nashville, Tenn. The Rebels lost 8-7. (Joshua McCoy/Ole Miss Athletics)

Bullpen has to ‘figure it out’ for No. 5 Ole Miss after another blown lead in series loss to No. 15 Vanderbilt

After Friday’s emphatic 11-3 win to begin its series against No. 15 Vanderbilt. After leading twice in the first game of Sunday’s doubleheader. And again after rallying for a two-run lead in the latter innings of the nightcap.

But No. 5 Ole Miss couldn’t hold any of them at Hawkins Field, and a bullpen that’s largely been one of the Rebels’ strengths this season is suddenly a cause for concern after a pair of rough weekends. Vanderbilt scored three runs in the bottom of the sixth to sweep the twinbill with its second 8-7 win of the day, handing the Rebels their first losing streak of the season.

With their second straight series loss, Ole Miss (29-8, 8-7 SEC) also dropped two games behind Arkansas and a game back of LSU in the SEC West standings halfway through the league slate.

“We’ve got to figure it out. We were so good a few weeks ago with a lead,” Ole Miss coach Mike Bianco said. “The bullpen was so strong, and we’ve lost a little bit of that. We’ve lost a little bit of confidence. Certainly it starts on the mound, and it’s disappointing to have that many leads today itself but even if you go back to last Sunday, it was the same thing where we couldn’t close it out. We’ve got to clean that up.”

Ole Miss’ bullpen coughed up a pair of leads in last week’s series finale at Mississippi State, and the struggles continued in Nashville despite both of Sunday’s games being shortened to seven innings after Saturday’s game was postponed because of inclement weather. Making the nightcap tougher to stomach for Ole Miss was the fact the offense picked up James McArthur, who had five strikeouts through the first two innings before giving up five combined runs in the third and fourth, including back-to-back homers to Pat DeMarco and Stephen Scott, to erase a 5-1 deficit with a four-run fifth before taking its first lead since the first with two more in the sixth.

McArthur allowed five runs on four hits and struck out eight in 3 1/3 innings.

“The thing that got him in Game 2 (Sunday) was he ran some counts up early on when he struck out maybe five in a row,” Bianco said of McArthur. “He was in some good pitcher’s counts. A few innings after that, he struggled and got behind a little bit and a couple of fastballs got up in the wind.”

Tyler Keenan started the rally with a solo home run as the Rebels began the fifth with six straight hits to chase Vanderbilt right-hander Mason Hickman, who had allowed just one hit before that but was tagged for five earned runs while walking one and striking out five. Ryan Olenek, who extend his hitting streak to 15 games with two more hits, singled home a run while Nick Fortes followed with a two-run double to tie it before Ole Miss turned a 7-5 lead over to the bullpen after RBI singles from Cooper Johnson and Grae Kessinger in the sixth.

Will Ethridge (1-1) came back out for his third full inning of work, but a sacrifice bunt was the only out he recorded in the frame as two singles and a walk loaded the bases for the Commodores (22-14, 9-6). With Parker Caracci unavailable after throwing 48 pitches in the first game and Dallas Woolfolk and Will Stokes being largely ineffective as of late, right-hander Austin Miller came on for his first SEC appearance of the season and got two strikes on Ty Duvall before Duvall roped a bases-clearing double into the right-field corner to put Vanderbilt back on top.

“Their job is to come in and take the momentum away from the other team, put zeros up and get off the field unscathed,” Bianco said. “We were real good at doing that at a time when I was disappointed in the starters. It felt like we were really leaning on the bullpen too much. Now the starters have really caught fire and pitched well, and we’ve got to do a better job out of the bullpen.

“I don’t know if it’s another arm or the guys that are there have to pitch better.”

The Rebels threatened to draw even in their final at-bat when Fortes reached on an error to start the seventh and stole second. But after Thomas Dillard popped up on the infield, Fortes was thrown out trying to steal third before Jackson Gillis got Cole Zabowski looking to end Ole Miss’ eight-game road trip on a bitter note.

Ole Miss will try to regroup with four games at Oxford-University Stadium this week starting Wednesday against Arkansas State at 6:30 p.m.

“It’s been a tough two weeks against some really good teams,” Bianco said. “We didn’t play well enough to win a few more.”

Oxford’s Gordon Whitwell making a name for himself in tennis