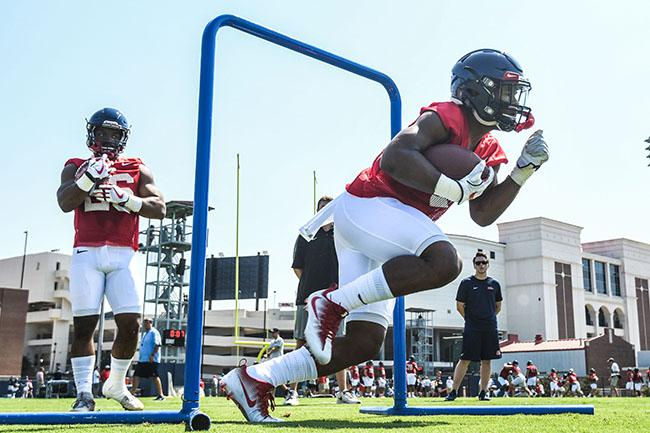 It’s game week for Ole Miss, which means it’s time for coach Matt Luke to finalize the depth chart ahead of the Rebels’ opener against Texas Tech in Houston on Saturday (11 a.m., ESPN).

Ole Miss will officially release it Monday morning before Luke’s first in-season press conference. Things will be fluid early regardless of what that looks like on paper, particularly for a defense that spent all of camp mixing and matching in the front seven as it looks for more consistent production, but here’s a guess based on what we’ve seen and heard in the preseason.

Why: No mystery here. Ta’amu should take another step in his development in his final season now having two springs and two camps in Phil Longo’s offense. Corral, the highest-ranked signee in the 2018 recruiting class, has all the physical tools and is at the point in his mental progression where both he and Longo are comfortable with him running anything in the playbook if called upon.

Why: All indications are Phillips will be the one taking the field for Ole Miss’ first offensive series against Texas Tech. The junior college transfer has separated himself a bit in the race to replace Jordan Wilkins with a running style that’s both explosive and decisive. But Swinney, who’s remained healthy after suffering season-ending injuries his first two years with the Rebels, has continued to get some first-team reps, indicating it could be a platoon until someone establishes himself as the go-to back. Woullard has drawn praise for his consistency and appears to be next in the rotation.

Why: An underrated athlete, Knox is back for his second season as a starter after coming on late last season as a viable threat in the passing game. Unlike last season, he enters this one healthy after having offseason surgery to repair a stress fracture in his foot. Hovering around 260 pounds, Cooley has recently split first-team reps with Knox and appears to be in line for his biggest role yet in the Rebels’ offense after struggling with his weight and consistency in recent years. Tight ends coach Maurice Harris recently talked about even having them both on the field at the same time in certain formations.

Why: This one doesn’t need much explaining. Metcalf and Lodge make up two-thirds of arguably the nation’s top receiving corps on the outside while Brown, a first-team All-American, is back for what’s likely his final season in the slot after leading the SEC in receiving yards (1,252) and touchdowns (11) a season ago. How the rotation fills out behind them will be interesting. Sanders repped with the ones when Lodge was out with a sprained ankle during camp while Moore, a freshman, split time between the first and second teams. And don’t forget about Weber, freshman Miles Battle or former walk-on Floyd Allen, who got most of the first-team reps in camp when Brown missed time with a hamstring injury.

Why: Again, not much to explain here. The Rebels get one more year of Little’s services before the 6-foot-6, 320-pounder likely joins Brown in the first round of next year’s NFL Draft. The heir apparent to Little, Newman, a redshirt sophomore, could fill in on either side of the line this season as the Rebels’ third tackle.

Why: The grizzled veteran on one of the SEC’s most seasoned offensive lines, Patterson enters his senior season as durable as they come with 30 career starts. The 6-6, 300-pound Mathews is among a handful of 2016 signees that are an injury away from filling in up front.

Why: Rawlings, a Rimington Trophy watch lister, begins his final season having started 26 career games. The Rebels’ starting right guard a season ago, Sims is the team’s sixth lineman and could fill in at either position.

Why: Brown quickly took control of the competition between he and Sims early and never let up, repping with the ones throughout camp. The redshirt freshman’s combination of strength, physicality and football IQ put him over the top. Sims will rotate here some if he’s not needed at center, but Tuitt spent most of camp repping with the second team.

Why: Givens has quietly been one of the Rebels’ more versatile options up front, getting starts at tackle and guard the last two seasons, but he’s entrenched at tackle with Rod Taylor off to the NFL. A member of the 2017 signing class, Gray is in line to be part of the rotation up front after redshirting last season.

Why: Evans made four starts last season before suffering a season-ending injury and is back healthy for his final season. Charles Wiley has been getting most of the second-team reps behind him, but watch out for Tariqious Tisdale. Impressing with his quickness and athleticism at 6-5 and 280 pounds, the junior college transfer got a long look in camp and even repped with ones for part of it. The coaches seem determined to carve out a role for Tisdale, whose skill set may be too much to keep off the two-deep.

Why: Sheppard and Anderson both began the preseason at the top of the depth chart, and there didn’t appear to be much separation during camp. Anderson opened camp running with the ones before Sheppard repped with the first team toward the end. Sheppard, who’s healthy after dealing with an ankle injury last season, is the better pass rusher and may be more well-rounded at this point, though the 6-6, 245-pound Anderson is the stronger option against the run. There will be plenty of rotating here.

Why: Jones and Donelly began camp in a competition here, but Jones is healthy again after playing through a concussion and a torn labrum last season and has the prototypical build for the position at 6-2 and 315 pounds. Donelly brings plenty of experience into his senior season having played in 25 career games.

Why: Coatney returns for his junior season as the most productive defensive lineman back after collecting 65 tackles and eight tackles for loss last season. A versatile 6-4, 280-pounder, Robinson repped at both end and tackle during camp and is likely line up at both positions at some point this season.

Why: Coaches were consistent with their message about the linebacker position during camp that it’s time to get the best players on the field regardless of their age or experience level, and recent moves at the position seem to back that up. Sanogo, a sophomore, and Baker, a redshirt freshman, have been repping ahead of Detric Bing-Dukes for weeks with Sanogo getting the majority of the first-team reps lately. Baker, more of a downhill linebacker, repped with the ones and twos throughout camp.

Why: Ruggs has been the talk of camp among the linebackers with his speed and athleticism on the outside and has been repping with the ones for weeks now. There will be mistakes made as part of the learning curve for a true freshman while it will also be interesting to see how the 6-4, 190-pounder holds up in the run game, but Ruggs is already one of the most physically talented options at the position. Josh Clarke, another freshman, began the preseason atop the depth chart here, though Hibler has recently been getting all of the second-team reps.

Why: It wouldn’t be a surprise to see either player take the field for the Rebels’ first defensive series Saturday, but at 6-1 and 200 pounds, Dasher, who played linebacker in junior college, has the combination of speed and physicality coaches like at a position where versatility is needed. He’s coming back from a groin injury that required him to miss part of camp and has split first-team reps with Custis, who’s got the edge in experience having played 10 games in McGriff’s defense last season.

Why: Jones is back at corner after making seven starts at safety last season and may be the Rebels’ best cover guy at this point. Hamilton, a senior, figures to get plenty of snaps, too, after tying for the team lead with three interceptions last season.

Why: Webster may take over here once he’s healthy, but Hartsfield is in line to get most of the snaps in the opener. Hartsfield, who began his career at safety, also worked at Star during camp. Luke listed Webster as questionable for Saturday as the fifth-year senior continues to work his way back from a pulled hamstring.

Why: Woods, who begins his senior season with 25 career starts, has quietly put together a productive career since entering the starting lineup late in his freshman season. The preseason All-SEC selection’s 64 tackles last season were fourth-most on the team. Miller played in four games as a freshman last season.

Why: Moore, a senior who was the recipient of the this year’s Chucky Mullins Courage Award, began the preseason atop the depth chart here and put together a consistent camp to secure his starting spot. A member of the 2017 signing class, White (6-2, 206 pounds) is a big-bodied safety that’s set to contribute after redshirting last season.

Why: This is contingent on whether the Rebels plan to use A.J. Brown as a punt returner again this season, which doesn’t sound like the plan. Brown didn’t rep there during camp with his hamstring injury and recently said he’d be fine returning punts in an emergency, indicating Moore or Knight (or both) are in line to take over. The true freshmen were the main punt returners during camp.

Why: Jones averaged more than 25 yards on kick returns last season and took one 97 yards to the house. Knight got a long look as both a punt and kick returner in camp as Ole Miss seems determined to find a way to use the 5-7, 170-pounder’s skill set.

Why: Logan handled all kickoffs last season and will now fill the vacancy left by Gary Wunderlich, who finished his career as the Rebels’ all-time leading scorer. The sophomore was 2 of 3 on field goals last season, his longest being 25 yards.

Why: Another sophomore, Brown has been groomed to take over for Will Gleeson, who ran out of eligibility after last season. Brown punted five times last season and averaged 42.2 yards on those kicks.